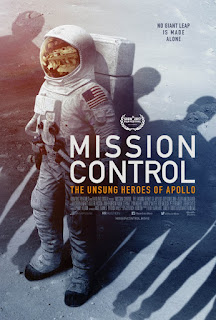 
What an astonishing piece of history I’ve just had an absolute pleasure to sit through.

Space travel, rockets, the moon, all these things barely register with me as an interest. I never dreamt of being an astronaut, I didn’t grow up remembering who was on what rocket at what time. Obviously certain names seep into the psyche over time, Buzz Aldrin is never off television to start with and, obviously, Neil Armstrong is an important figure to some and is spoken about so much it’s impossible to not know who he is. However, I got to watch a documentary about the Yugoslav space program at the London Film Festival a while back (reviewed HERE) and I realised that maybe I am a bit more interested in the history of space than I first thought, especially the real people that are involved. Hence the reason I jumped at the opportunity to review Mission Control: The Unsung Heroes of Apollo.

At the heart of the Apollo program was the special band of brothers in Mission Control. The feature documentary film Mission Control: The Unsung Heroes of Apollo tells their stories, describing the rural homesteads and smokestack towns they came from, and the remarkable team they became. The film consists of interviews with those who worked in Mission Control and astronauts, enhanced by extraordinary archive, stunning VFX and an original orchestral score. The film covers the first journeys to the moon by Apollo 8 and Apollo 11, and the huge effort required to save the crew of Apollo 13.

The history of space is covered really well from the day the Russians beat the Americans to today’s International Space Station. Obviously, being about the Apollo missions, the film spends a great deal of its time and detail on these trips and the trials and tribulations involved in the exploration of space. The people interviewed were fascinating to listen to, the likes of Dr. Kraft and Gene Kranz on the Mission Control side, to the astronauts involved like Jim Lovell, and the access to information and memories that David Fairhead has gathered and put together is extraordinary.

I could have done with a bit more on the political decisions that led to some Apollo launches being cancelled and the program being eventually wound down, but that’s because my interests are nearly always political. Nevertheless the level of detail and interest in this film are so in depth and well put together it holds the interest right to the end.