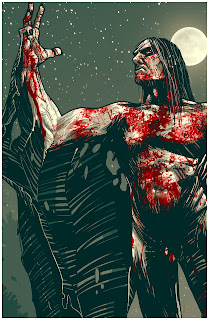 New British animated motion comic Realm of the Damned - Tenebris Deos is now out on DVD and Blu-ray in the UK and free to stream on Amazon Prime. Our resident metal-head Romeo Kennedy watched it...

A violent, supernatural, black metal monster extravaganza of a story.

A terrifying, ancient evil has arisen again with the help of the Black Metal band Sons of Balaur, and a mask from an antique dealer.

Enter Balaur, the uber vamp with a ferocious appetite, and brother of super cool but immensely dangerous vampire queen, Athena Petrova. With the help of Balaur's worshippers, he is on a mission to unleash gory bloody hell and wreak absolute unholy havoc on earth.


But worry not, good people, Albrecht Van Helsing is on the case to save the day and destroy Balaur once and for all.

Realm of The Damned: Tenebris Deos is a beautifully illustrated motion comic. 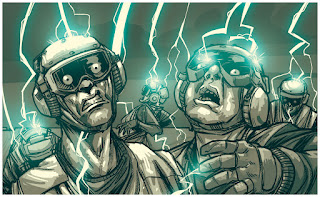 The dark and gloomy artwork adds a deep aesthetic to the story, and the splashes of colour really make the artwork shine, especially in the more gory moments, of which there are many.

Of course I geeked out about the unholy trio of metal vocalists committing their talents to some of the characters and all of them were fantastic especially Dani Filth who voices Balaur (as well as a ghoul and the werewolf king La Bette) himself using his awesome metal growling technique, which really added something special to the character.

David Vincent was the perfect voice for Van Helsing, who is a troubled monster hunter addled by addiction and a dark past. Vincent's deep voice added a melancholic feel to the character and was a brilliant casting choice. And, Athena Petrova, along with her horde of vampire soldiers and lackeys, certainly makes an entrance which Jill Janus' powerful voice lets you know that she certainly is a vampire not to be messed with or you'll end up being a very gory lunch. 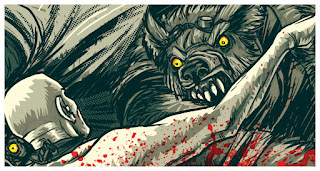 The story is about 56 minutes long and is paced really smoothly. Although this is the first motion comic I have seen, it was easy to follow the story and know which character without the aide of speech bubbles etc. Keen-eyed Black Metal fans be on the look out for a few BM easter-eggs along the way.

As well a classical score, the rest of the soundtrack is from the actual Sons of Balaur [You can find Romeo's review of the soundtrack over on AlbieMedia today too - Ed.] I'm always of the opinion that more metal music should be in horror movies and Realm of The Damned is no exception. The addition of the metal by evil botherers The Sons of Balaur works really well especially in the fight sequences.

Myself and my wife Kat (@KatKennedyMusic) watched Realm of The Damned together and we both really enjoyed it from start to finish. Kat had this to add, "If you are a fan of horror films, Realm of The Damned: Tenebris Deos is perfect for you. It was really enjoyable and my only problem with it was that I wanted more."

I really hope that there are plans to do more Realm of The Damned stories, in motion comic format or otherwise. There is a lot of scope to make more cool stories in this style, with or without our troubled hero, Van Helsing. And hopefully, if in motion comic form especially, there will be more stars of metal adding their vocal talents to a plethora of monstrous characters and ghoulish creatures.

Realm of The Damned: Tenebris Deos is out now. The DVD comes with a cool booklet which goes into detail about all of the characters in the story, as well as some character cards both with Simon Parr’s cool artwork.

The streaming version includes an extra track by Cradle of Filth