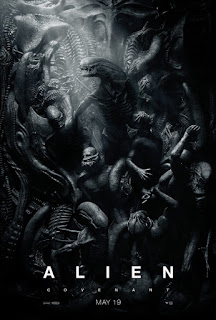 What do you mean, "not the same thing?"

Ridley Scott returns to the universe he created, with ALIEN: COVENANT, a new chapter in his groundbreaking ALIEN franchise. The crew of the colony ship Covenant, bound for a remote planet on the far side of the galaxy, discovers what they think is an uncharted paradise, but is actually a dark, dangerous world. When they uncover a threat beyond their imagination, they must attempt a harrowing escape.

Starring Michael Fassbender, Katherine Waterston and Billy Crudup (who was ALSO in Eat Pray Love - Aha! SEE??? NOT just a coincidence...), the film hits cinemas on 19th May.