Film - Guardians of the Galaxy Vol 3 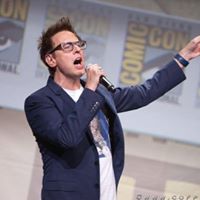 Yes, before Vol 2 has even hit the big screens we're excited for Vol 3. Because director James Gunn has CONFIRMED that he is returning to helm the 3rd film of the hit franchise...

James Gunn yesterday confirmed in a long post on Facebook (read the full thing here) that he will return to write and direct Guardians of the Galaxy 3. He goes on to say that his partnerships at Marvel Studios and great working relationship with Disney went a long way towards influencing his decision and that his "love for Rocket, Groot, Gamora, Star-Lord, Yondu, Mantis, Drax, and Nebula – and some of the other forthcoming heroes – goes deeper than you guys can possibly imagine."

We also know where in the MCU timeline the third film will take place as Gunn points out that "Much of what’s happened in the MCU for the past ten or so years has been leading, in a big way, to the Avengers’ Infinity War. Guardians of the Galaxy Vol. 3 will happen after all that." He goes on to give some further details saying "It will conclude the story of this iteration of the Guardians of the Galaxy, and help catapult both old and new Marvel characters into the next ten years and beyond" and has confirmed that he will be working with "Kevin Feige and the gang" to ensure a close fit in the existing MCU.

With Guardians of the Galaxy Vol 2 due in cinemas on 28th of this month (May 5th in the US - ha!), I think we can all echo the feeling of James Gunn as he says...

"I can’t fricking wait to get started."