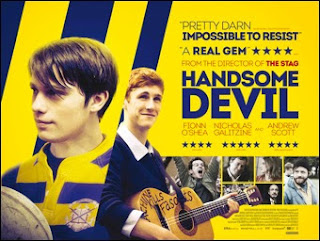 Following its English premiere at the BFI Flare festival and having done well on the Festival circuit, Handsome Devil starring Fionn O'Shea, Nicholas Galitzine and Andrew Scott is in UK cinemas now. Watch the trailer...

If you've followed us here at The DreamCage for any length of time at all, you'll recognise the name of Nicholas Galitzine. He was the boy who made his film debut starring alongside Luke Perry in our favourite indie film of a few years back, The Beat Beneath My Feet. And he's just getting better and better.

Award-winning writer/director John Butler (The Stag) returns with a charming story of the unlikely friendship between two boarding school roommates – music-mad Ned (Fionn O’Shea) and macho rugby player Conor (Nicholas Galitzine). In this funny and observant coming-of-age tale, the boys take an instant dislike to each other but are encouraged by their English teacher (Andrew Scott) to find their own voices and defy the status quo.