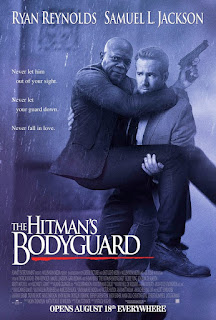 While the rest of the planet is still oohing over the Star Wars trailer or waiting for Doctor Who, here at The DreamCage we like to take things a little more seriously. Watch the NSFW (but it's Easter Saturday so not a problem) trailer for The Hitman's Bodyguard...

The world’s top protection agent [Ryan Reynolds] is called upon to guard the life of his mortal enemy, one of the world’s most notorious hitmen [Samuel L. Jackson]. The relentless bodyguard and manipulative assassin have been on the opposite end of the bullet for years and are thrown together for a wildly outrageous 24 hours. During their raucous and hilarious adventure from England to the Hague, they encounter high-speed car chases, outlandish boat escapades and a merciless Eastern European dictator [Gary Oldman] who is out for blood.

As one of the comments on the video said "All I see is Nick Fury trying to recruit Deadpool into the Avengers.﻿.." but, for me [Susan, erstwhile editor], it's the wonderful use of the Whitney Houston soundtrack that makes this the funniest trailer since, well, since the last thing Ryan Reynolds was in.