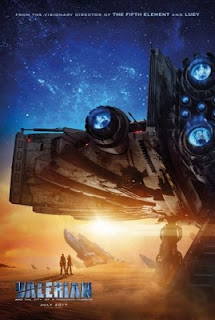 I know, I know, we don't normally do tabletop gaming news so I (Susan - News Editor) will take full responsibility for running this press release. But there's going to be a VALERIAN BOARD GAME...

Ultra PRO Entertainment has announced Valerian: The Alpha Missions, a cooperative-style board game based on the upcoming EuropaCorp feature film, Valerian and the City of a Thousand Planets, directed by Luc Besson (The Fifth Element, Lucy) and starring Dane DeHaan (The Amazing Spider-Man 2) and Cara Delevingne (Suicide Squad).

In Valerian: The Alpha Missions players work together to complete mission objectives, battle nefarious aliens and return to safety.

Valerian: The Alpha Missions gives fans of tabletop gaming and the Valerian franchise the opportunity to discover Alpha, a vast metropolis in which species from across the universe gather over centuries to share knowledge, intelligence, and cultures. After assembling a team of agents, players must cooperate to explore a contested zone of Alpha, race to complete objectives while battling and evading enemies. Complete the missions and get to the extraction site in time to win!

The game board consists of randomly placed tiles that are revealed as agents move around the map, creating a unique experience each game. Players will never know who or what they might encounter – enemies could attack or players may discover valuable resources to power their mission gear. Each player must decide whether to split up and accomplish their objectives faster or sacrifice valuable resources to save their teammates. As the clock runs down and enemies gain ground, only the most skilled team of agents will complete their missions to return as heroes.

"We jumped at the opportunity to work with such a fantastic sci-fi film by Luc Besson, one of my all-time favorite directors. Having a great working relationship with Striker Entertainment and EuropaCorp's commitment to this project gave us an exciting platform to create and craft a spectacular game" said Sean Lashgari, Senior Director of Ultra PRO Entertainment. "After diving into this project we saw something very special being created from Luc Besson's vivid imagination, and we worked with Ryan Miller, one of the best game designers in our industry, to capture a slice of that universe for the fans." Ultra PRO Entertainment plans to release Valerian: The Alpha Missions by the end of July.

"We are thrilled to be working with the team at Ultra PRO who quickly immersed themselves into the world of Valerian and created a fun and unique game that is different every time you play it. They used many of the elements from Valerian ranging from the multitude of aliens, to the many areas of Alpha, to the different resources and cultures that will appeal to both fans of Valerian, as well as, people just discovering the world" said Virginie Besson-Silla, producer of Valerian and the City of a Thousand Planets.

The film, Valerian and the City of a Thousand Planets, is the visually spectacular new adventure film from Luc Besson, the legendary director of The Professional, The Fifth Element and Lucy. It is based on the ground-breaking French comic book series written by Pierre Christin with art by Jean-Claude Mézières which inspired a generation of artists, writers and filmmakers. The film is produced by Virginie Besson-Silla.

In the 28th century, Valerian (Dane DeHaan) and Laureline (Cara Delevingne) are a team of special operatives charged with maintaining order throughout the human territories. Under assignment from the Minister of Defense, the two embark on a mission to the astonishing city of Alpha—an ever-expanding metropolis where species from all over the universe have converged over centuries to share knowledge, intelligence and cultures with each other. There is a mystery at the center of Alpha, a dark force which threatens the peaceful existence of the City of a Thousand Planets, and Valerian and Laureline must race to identify the marauding menace and safeguard not just Alpha, but the future of the universe.

Here's a reminder of the film trailer.