Project: RPO – Some Kind of Wonderful 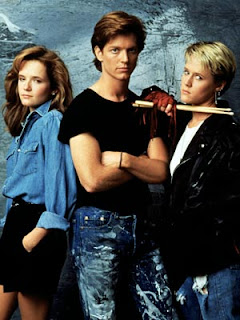 Our small band of Gunters here in The DreamCage universe are reviewing every film mentioned in Ernest Cline's Ready Player One. This week Steve Taylor-Bryant takes on Some Kind of Wonderful...


I normally pride myself on my knowledge of John Hughes films but, when we were talking about Some Kind of Wonderful in the office, my mind was blank. Not just that there wasn’t a quote or scene on the tip of my tongue kind of blank. Nope, I couldn't remember a thing. So when the review choice came up I grabbed it, so I could work out why nothing at all came to mind when we talked about it. Turns out I had never seen it. I’ve spent thirty-odd years thinking I had, so never sat to watch it. Not sure how that happened but anyway watch it for Project: RPO I did.

Meh. There’s a word I don’t usually use to describe John Hughes’ films. I enjoyed it but think, in a year’s time when we talk about it again, my mind will still go blank as there is very little memorable about the film. I know why, though, and that’s casting. John Hughes’ films all work because of the extreme talent he finds in the young actors to portray his protagonists. Yes, Hughes writes the issues of youth brilliantly but they are nearly all the same issues in every film, each film though becomes memorable in its own right due to the casting. You remember Sixteen Candles because of Molly Ringwald, you remember The Breakfast Club because of the incredible ensemble, you still talk about Pretty in Pink because of, again, Ringwald and because of Jon Cryer’s Duckie. The list of Hughes films that work due to supreme casting is almost as endless as the memories we have but, with Some Kind of Wonderful, I just didn’t buy into anyone.

Eric Stoltz, playing Keith Nelson here, is an actor who really annoys me. He has undoubted talent but just never seems to pull off a role in a way you know he would be capable of. He has a back catalogue of huge proportions but I can’t find one character he has played that stands out. Even in Some Kind of Wonderful he has the chance to be more than just ‘the boy’ and when the confrontation with his father arises he has the chance to match the brilliant John Ashton in a highly emotional scene, he just falls flat. Mary Stuart Masterton as the tomboy Watts was criminally miscast. Such a beautiful actress with the natural ability to hold a viewers attention shouldn’t be forced to portray a character like Watts, she most definitely could have played Amanda Jones and the casting choice has left me slightly miffed if I’m honest. Then we get to Jones herself, Lea Thompson. Thompson is okay in stuff but I think that’s my problem with her, she’s just okay. In the way that Masterton shouldn’t have been forced to play Watts, Thompson isn’t a leading lady. Maybe if they had swapped roles? I don’t know what the fix is, but did I mention how cross the casting choice for Masterton has made me?

When you look deep into John Hughes films, pick them apart, you realise how generic and similar they can be. Don’t get me wrong I am not criticising Hughes, he told simple coming of age tales very well, but they only work and get revered so many years later because something sticks in your mind. Think about a Hughes film, any Hughes film, and your first thought will be a cast member. Some Kind of Wonderful will not be remembered by me in a year let alone thirty years, and it’s all on the cast.