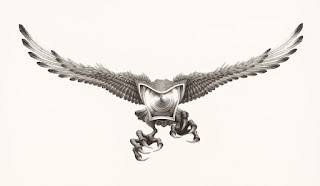 The DreamCage’s pop culture junkie returns with an occasional column on what you need to be getting into now...


Let's start with a basic truth: now is the time of nirvana for geeks. Be you a B-movie obsessive or a consumer of convention culture, what you are into is probably being covered in exhaustive detail somewhere on the net, with merch to match*.

But that sheer volume is also intimidating, especially for those late to the party who, say, don't want to have to watch all of Marvel's Netflix shows to keep in the zeitgeist**. This column is here to help reduce that worry and point you in the direction of emerging projects that don't require either a high investment of money or time to enjoy.

This first column is on the art project CCTVYLLE***. Focused around a comic as its primary source, it's also a delivery system for an art collective.

CCTVYLLE comes from a dream had by its creator Gianluca Bonomo

“Inspired by a dream I had a few years ago, CCTVYLLE™ is an imaginative exploration of the future of surveillance systems and the inevitable consequences of an extreme and grotesque use of technology. Sometimes even an apparently innocuous invention can lead to unforeseeable changes in society. In the dream, I saw a tree with dozens of strange creatures perched on it. The scene was as fascinating and chilling as it was arresting. Suddenly I realized I was seeing a possible future.”

The comic itself focuses on the core idea of how technology can change society in sweeping and unforeseen ways. In this case, the creation of hybrid bird/security cameras has lead to a surveillance state unparalleled in human history, a subject all too topical in today's modern society.

The idea of a relevant take on creeping surveillance states is married perfectly with an art style that is distinctive and fluid. Be it portraying a feverish nightmare, reality or the uneasy relation between the two in the world of CCTVYLLE, its high production values make it stand out from other independently produced comics.

It's that dedication to high standards that draws me to CCTVYLLE (even if the occasional second pass on the dialogue is needed) and makes it stand out. Quite why it doesn't have a higher profile I have no idea, but I hope the kickstarter for the second issue that is currently running will raise that profile.

The kickstarter itself will end on Sunday, so now is the time to back it. If you need to catch up on things, rewards include all of the published comics, unique and rare art and more. The kickstarter is here:

Below is some of the art. So if this is your thing, back it now! 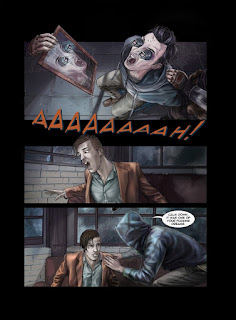 Next week, another recommendation. Why don't you tell me what you would recommend on Twitter or in the comments below?

*note to self; find more merch.

**Spoilers: Daredevil is average but gets better, Jessica Jones amazing, Luke Cage is so-so and Iron Fist you can just read the wiki. There, 62 hours saved.

***Disclaimer: I do know the creator of this project and have conversed with him via email. I was the guy who, according to Steve “Loved this shit when nobody else saw the appeal”. It doesn't stop me from pointing out the points for improvement in the project, but for those out there that value transparency in their reviewers, this is my declaration.****