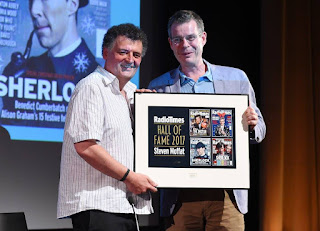 Ren Zelen attended the closing gala event of BFI/Radio Times Festival of TV to listen to Steven Moffat in Conversation...

With his time as Doctor Who showrunner coming to an end, and Sherlock on indefinite hiatus, Steven Moffat is planning a break,

"I'm going to go on a family holiday where [my wife] doesn't book me an extra room where I have to go and write,” Moffat told an audience at the BFI & Radio Times Television Festival. “I'm just going to sit on the balcony with a gin and tonic, talk to my kids, talk to my wife and have a bloody good time.”

Steven Moffat was in conversation with Doctor Who superfan Frank Skinner, in a session that covered anecdotes and TV clips from Moffat’s wide-ranging career.

If one has spent seven years in charge of two of the biggest dramas on British TV, one might need a breather, but then Moffat is back to writing. He has a few ideas lined up, including a series previously approved by the BBC and a project with friend and Doctor Who writer/Sherlock co-creator Mark Gatiss.

“There was one script I actually had greenlit by the BBC before Doctor Who and Sherlock came along... it needs a massive re-write but I still really like it, I might have another go at that,” he asserted, adding, “Obviously, Mark and me, we can't have a conversation without inventing some sort of TV series and we've got a notion we might like to do..."

Moffat and Gatiss famously discussed their idea for an updated version of Sherlock Holmes during train journeys to Cardiff for the filming of Doctor Who, so, could their latest idea repeat that success?

“I'm aware that I've lived through my highlights," said Moffat ruefully, "I'm never going to top being the guy who did Doctor Who and Sherlock at the same time. I'm not sure I even want to, it's an amazing thing."

Moffat’s big break came back in 1989 on ITV’s BAFTA-winning teen drama Press Gang. That, and the BBC comedy about teaching called Chalk, related to his own experiences. However, he joked, these were the fictionalized experiences he would have liked to have had, not the reality, which was much more solitary and miserable.

He went on to write about the vagaries of dating and relationships in BBC sitcoms Joking Apart and Coupling. Although Chalk was not a success, Coupling went down well with both critics and the viewing public.

When it ended after four high-rating series, Moffat used the heightened profile this had given him to petition for the chance of writing for the show which had created his love for television in the first place, and of which he remains as much of a fan as a creator - Doctor Who. He bemoaned the fact that, just as he was beginning his career in TV writing, Doctor Who was taken off the air, but, as luck would have it, it was about to be ‘regenerated’. 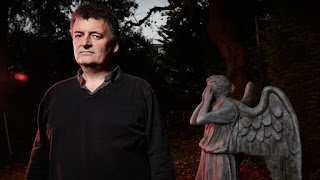 He was ecstatic to write episodes for his favourite show, including ‘Blink’ which won him a BAFTA in 2008 - “It was odd, because the Doctor wasn’t in it much…” - but the episode served to boost the career of the versatile British actor, Cary Mulligan, who delivered a striking performance.

Moffat is currently writing this year's Doctor Who Christmas special and episodes for upcoming series ten, after which current Doctor, Peter Capaldi, will leave, and Moffat will hand over the reins to Broadchurch creator Chris Chibnall and a new Doctor.

“The incredibly exciting thing about Chris taking on the show is, he’s actually the most experienced showrunner to come on to Doctor Who. I’d never run a show before really, [former head writer] Russell [T Davies] had done a bit but, you know… Chris is coming onto the show with the experience of doing Broadchurch. He’s already done a major-league, much-fussed about show, so he’s got all that experience.”

The rumour that John Simm’s Master would be returning to Doctor Who, appearing in a story alongside his regenerated incarnation Missy (Michelle Gomez) had recently been circulating,

“Well I’d always thought when we got Michelle that at some point, it’d be fun to have a story where two versions of The Master meet,” Moffat told us, “I’m sure everyone’s thought that at some point. But in a way you can’t do that straight away - you’ve got to let the new one become the definitive iteration as it were, and then you can bring in the wonderful John Simm.”

The idea had existed even before Gomez’s casting, with Simm privately telling Moffat he’d be happy to return during a screening for his last appearance in the sci-fi series.

“And at the End of Time screening (Simm) said, ‘Well I feel that now David’s stepping down as the Doctor I feel I should step down as The Master, but he came and found me at the drinks and said ‘I didn’t mean it, I’m perfectly happy to come back.’

When asked about the criticisms that Sherlock had become too unrealistic during the last series, he laughed and answered rather cryptically, “Well, when people say that, I say, ‘Really? Where were you for the last three series then? It’s all been crazy!” but he insisted that he and Gatiss always respect Conan Doyle’s original source material.

He went on to praise the leading actors and described how when Cumberbatch and Freeman were first put together during auditions he was impressed by their instant chemistry, turning to Mark Gatiss and saying, ‘There is our series, right there!’ He also insisted that he would never consider recasting either of those two roles, as Sherlock’s whole success hinges on Cumberbatch and Freeman’s on-screen relationship.

Moffat’s advice to aspiring script-writers is to ‘keep writing’. “You have to write all the time and not worry so much about going to the right parties or the contacts you have in the business – they’re completely irrelevant,” he declared, “…and stop badgering people for advice, because there is almost none. If you write a brilliant script, it will get on the telly.”

Moffat had a brush with Hollywood when he co-wrote the screenplay for Steven Spielberg’s delightful adaptation of Herge’s The Adventures of Tin Tin – “I ran away from L.A to Cardiff to do Doctor Who, which is an unusual career path!” he laughed.

I asked if he has any more ambitions, “I'd like to write a play because it would be so completely different. My main enthusiasm though is just to be at the beginning of something as opposed to well into it."

After over an hour of reminiscences, anecdotes and audience questions, Steven Moffat received a standing ovation, headed by fan Frank Skinner, after he was inducted into the Radio Times Hall of Fame by the magazine's editor Ben Preston for his services to television. He follows acclaimed inductees, Sir David Attenborough, and Michael Palin.