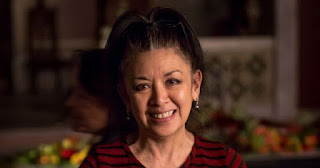 Steve Taylor-Bryant finally puts down his copy of Feeding Hannibal - A Connoisseurs Cookbook and spends some time talking to its creator, Janice Poon...


For 19 years, before I became involved with TheDreamCage, I was a chef. I was quite good, I won some AA rosettes although I never got anywhere near a Michelin star. The last decade of my time in Chef's whites was for large pub/restaurant groups as a trouble shooter, the Red Adair of catering or the Ramsey’s Kitchen Nightmares of the United Kingdom restaurant chains. I would go into underperforming branded eateries and sack staff, train staff, liaise with managers that didn't have a clue about the hot room at the back of the building and design idiot proof menus that could be prepared in minutes and look and taste exactly the same no matter where in the country you were, and this took a toll on both my mental and physical health (105 hour weeks for 10 years will do that to a person) and led to me falling out of love with food and the trade in general.

Shoot forward a couple of years and here I am. I work for a growing Media Group and a couple of online magazine websites, I survive within a superb and enthusiastic team and can talk to those folk that inspire me. This week I have also managed to regain a love of food at the same time as talking about television - bonus!

This has occurred thanks to the Hannibal TV Show and its associated recipe book, Feeding Hannibal - A Connoisseurs Cookbook, by the wonderful Janice Poon. Hannibal is a serial killing sociopath with a stupendous taste in food, even if most of it is made of people, so I reached out to Janice to request the opportunity to ask her all about her work.

Janice Poon is an award-winning Canadian based artist. A painter, a sculptor, an author, and now the reason I feel very hungry and incredibly impressed watching Hannibal, as she is the food stylist responsible for all the beautiful dishes. With the success of the cookbook and Janice’s new job food styling for Neil Gaiman’s American Gods I was lucky to catch up with her so here is the result of my time with the unsung hero of television and my new 'Foodie to admire'.

Hi Janice and let me start by thanking you for taking the time to talk to us. I am incredibly impressed with the work you do so I guess the best place to start is the beginning. How did you get into food? And how do you get a job like creating the meals on such a huge show?

I grew up in a food family – my grandfather and father owned restaurants and every one of my siblings has been a food professional at some point – from teaching cooking to catering. We have always been food obsessed – when not cooking or eating we are planning our next meal.

When you grow up in a restaurant, working with food is the last thing you want to do for a living so I went to art college. When I became art director at an ad agency, I got my first exposure to food styling. Who even knew that was a job!!! But three of my accounts were food accounts so I worked with food stylists a lot. I had also been doing sets and props for film and tv so it was a natural transition for me to start food styling too. Of course I started out just doing a scene here and there but then I was hired for Nero Wolfe, a series about a detective who was a great gourmet. That’s how I got recommended for Hannibal. 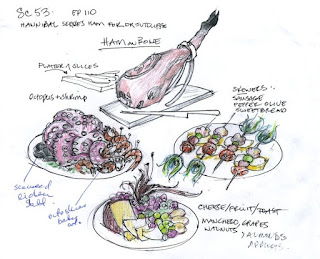 The meals served on Hannibal transcend anything I've ever seen in any restaurant. I would say more Van Gogh than Michelin star catering. How do balance what essentially has to be a meal with the artistic flare required to be so aesthetically pleasing on screen?

My ad agency experience as an art director gave me a sense of what works on screen and the aesthetic of Hannibal is such that it pushes the visuals to the extreme. My job is to make things look really appetizing but threatening – much like Hannibal himself. That means rich juicy colours and overflowing plates. But it always has to be something the actors can eat. And it as to be stable and not spoil or go funny during the long hours it takes to shoot a scene. Not too spicy, nothing that will stick on their teeth or be hard to chew. The food cannot inhibit their delivery of dialogue. So that means it’s usually not what the script say it is. If Hannibal says “It’s sweetbreads,” it’s probably chicken or potatoes carved to look like sweetbreads.

I read on your blog that there was a time you thought you had nothing to do but a late script meant only a small window of time to create something. What are the time constraints like normally working on a television show? And do you thrive on the pressure of tight and tightening deadlines?

I hate it when I read those late changes but I love the challenge because even though it almost kills you, there’s a wonderfully gratifying sense of accomplishment when you do turn the straw into gold. Series tv is a race against time because you only have 8 days to shoot each episode. So while you are shooting one episode, you are setting up the next one plus doing pick-up shots that you didn’t get in the previous one. It’s pretty hectic.

How much input do you have to what is created for us to see on screen? I guess the writers have their own thoughts and input but I'm interested in the freedoms you may or may not have.

I do discuss the food with Bryan Fuller (the creator/show runner) and Jose Andres (the culinary consultant) before the script gets written – Bryan often emails from the writers’ room with questions and requests for suggestions. But so often there’s a random bit that gets thrown in at the last minute and lots of times changes are made on set when the actors and the director gets to the scene.

Hannibal eats an ...um... mix of things - both human and animal - and I'm pretty sure not all of it can be the real thing in the food. Any weird or memorable ones? And what has been the most difficult to make look like what it should be?

They have all been weird and memorable. I think that everyone involved in Hannibal is interested in making each new episode the best one yet. Making the Kholodets in episode 12 was an epic challenge – quilting pickled anchovies into a Mobius strip and suspending them in gelatine – guys….c’mon. Can I get a break here? The script said “they looked like they were swimming”…and they did but you could hardly tell because gelatin is not as clear as writers think it is.

What has been your favourite creation so far?

I loved the ortolans of episode 11. They were so cute and yet bloated and dead looking. 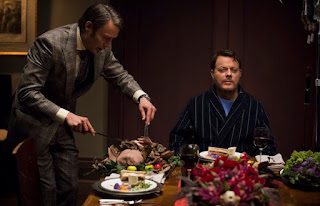 Are there any "insider" tips or tricks you can share with us for our own Hannibal Dinner Party?

Go forth to the kitchen with confidence but don’t over challenge yourself. Make one knockout dish and simplify the accompanying courses. The whole idea of cooking and eating together is to enjoy the experience. Make dishes you can prepare one or two days before so you aren’t trapped in the kitchen the day of the dinner. Don’t go mad decorating the plates – When I gave my Hannibal dinner, I didn’t garnish the plates much -- I focussed on table décor (which can be set up way ahead) to set the mood: bones, candles, peacock feathers and white roses was enough.

Hannibal likes to talk his guests through what they are consuming, Is it all about the look of the food or do you take flavour into consideration too? Artistic look over the reality of actually being able to create the dishes is one thing I struggled with as a young chef many (many) years ago.

Hannibal cooks and plates as if he has a crew of ten in his kitchen. We mere mortals have to prioritize. Flavour is what eating is all about but I find that decorating the plates make it fun and the design of the plate can lead diners to appreciate the qualities of the dinner -- the way art helps illuminate life.

What are the challenges of preparing and presenting food on a set?

Holding the food for long periods of time is the biggest problem. Food safety is my biggest concern. Then of course inconveniences arise from not having a fully equipped kitchen to work in because the workspace has to be portable and small so it can be moved to wherever the set is and not be in the way of everything else that’s going on. Running out of food is the next biggest concern. Or not having what the director wants even if he forgot to mention it.

We see that the Hannibal cookbook has been well received by people, when I got my copy I couldn't believe the quality of it compared to other cookbooks, how does it feel to have such a great book out in the world and having people actually cooking your recipes?

First of all, thank you for reading my Hannibal cookbook! I realize it’s not everyone who is interested in recipes for cannibals, so I am grateful for each and every copy purchased. I am really overwhelmed by the positive way in which my (very) niche book has been received. I wanted to make a book that all Fannibals could find useful - challenging because many are not seasoned cooks and a surprising number are vegetarian. I also wanted to provide a way for fans of the show to make the Hannibal experience a real and tangible part of their lives. Without the murder and mayhem, of course. The preparation and sharing of food is so emotionally charged and deeply woven into our lives that I felt a richly illustrated cookbook with fun recipes could bring Hannibal home for people in a very positive way.

You recently did the food styling for Neil Gaiman’s American Gods. Firstly, are you just trying to push the boundaries of my jealousy? Secondly, how does the new show differ to Hannibal? I’ve not seen American Gods yet but I imagine it's not as food centric as Hannibal was but will still throw challenges at you.

What is next for you? What challenges are you looking to conquer in the future?

I have a new novel in the works. My publisher has been asking for one more rewrite and I’ve only just started working on it now. Doing Hannibal dinners, attending comic cons and other events for the Feeding Hannibal cookbook, plus food styling Season One of American Gods has kept me too busy to write. And making the switch from externally driven film crewing to self-motivated writing is challenging.

On April 30, American Gods will premiere on Starz/Amazon and we will wait with abated breath to see if it will be renewed for a second season. In the meantime, I will fire up the old blog again to ramble on about food styling and behind the scenes stuff but instead of feeding Hannibal, I’ll be Feeding American Gods. Beyond that, who can guess what the Gods have in store for me?