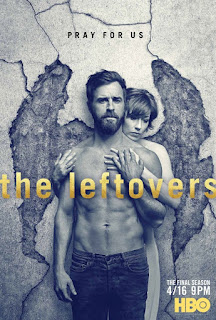 With the final season of The Leftovers just started in the US, Nate McKenzie advises you to dig in while there's still some left...

America/The World, I'm glaring at you.

You lack appreciation. Let me explain...

Westworld got a lot of traction in its first season and rightly so; it is an incredible story that kept viewers entranced and stumbling through its maze-like story while also showcasing some of the finest acting around, via Evan Rachel Wood.

Game of Thrones is one of the most popular shows on television despite having at least one season that was sub-par at best. GoT adheres to its source material about as much as an issue of Mad Magazine stuck to any movie it parodied, yet fans of the books love the show for what it is.

The Walking Dead has a huge fan following. This has continued despite the fact that it has steadily gotten worse and worse as the seasons ever-so-slowly crawl forward like that legless zombie in the very first episode. That tends to be the case when a show opts for outright goreporn instead of a well-developed story and characters. TWD is stagnant and bloated with grotesqueries, like that zombie in the well, and still it draws huge numbers.

The Leftovers, however, is one of the three best shows on television right now (between #1 Mr. Robot and #3 House of Cards) and yet no one has been watching.

Because television, despite most of us watching alone or with a partner, is a social event. For every person that watches only the fringe shows, there are five more people that only watch what everyone else is watching. People want to be included in conversations and entertainment tends to be the Great Unifier at dinner parties; something most everyone has some knowledge of and an opinion about.

In the past two years, I've stumped for Mr. Robot and for Halt and Catch Fire, both of which are infinitely better shows than The Walking Dead, Better Call Saul, or any of the heap of Superhero shows that exist.

Now, it's time for me to praise The Leftovers.

The only episodic entertainment that is better than The Leftovers is Mr. Robot. Although House of Cards, H&CF, Black Mirror, Game of Thrones, Westworld, and OITNB are all up there on my list of best television*, there is a significant divide between them and The Leftovers.

Each of those shows does at least one thing better than all other shows. That's what sets them apart from the barrage of quality viewing options. The Leftovers, though, does each of those things all at once. It's like the array of shows available are all black and white photos, with one bright, vivid colour that continues to draw the eye. The Leftovers contains the full spectrum of colours on display, including some that most people can't even see, like a tetrachromat's wet dream.

It is kaleidoscopic without overwhelming; like synesthesia, each sense impression lends to stimulation of the next. The visuals spark emotions, emotions heighten sensitivity, increased sensitivity catches the audio, the audio brings you crashing into the next climax. And it all leads to a feeling that is both leaden and empty.

Some have claimed that the problem with low viewing numbers for The Leftovers is that it's on HBO and not everyone subscribes to that channel. But, the popularity of GoT and Westworld make that an easy claim to debunk.

At this point, I am not even trying to get people into The Leftovers. This third season is the last and if you're not already obsessed, you don't deserve to enjoy what this final season will bring. Just stick to your zombies, your vampires, your drug runners, your genetically enhanced mutants and your spies.

The Leftovers is for those with an appreciation for the finer things; things that we know will ultimately cause despair when they are gone, but that we will enjoy experiencing while they're around, because they are, without a doubt, the best of their kind. If the Season 3 premiere from this past Sunday is any indication, the best three-season run in television history is happening right now.

Don't say I didn't try to tell you.

*I would include Stranger Things and Atlanta but with only one season each so far I don't think it's fair to include them among shows that have proven themselves with multiple quality seasons.