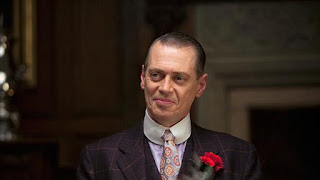 More casting and creative news has been announced for Philip K. Dick's Electric Dreams [with added squee noises from our News Editor]...

Emmy, Golden Globe and SAG Award winner Steve Buscemi (Boardwalk Empire, Boss Baby) [SQUEEEE] will play Ed Morris in the ultimate Philip K. Dick comic film noir nightmare “Crazy Diamond”, an episode of Philip K. Dick’s Electric Dreams inspired by the story of the same name. As average a man as ever there was, when approached by a gorgeous synthetic woman with an illegal plan that could change his life completely, a smitten Ed decides to help... and then his world really begins to crumble. “Crazy Diamond” is written by Tony Grisoni (The Young Pope, Red Riding, Fear and Loathing in Las Vegas) [SQUEE again] and directed by Marc Munden (National Treasure, Utopia).

Greg Kinnear (Heaven is For Real, As Good As It Gets), SAG Award winner and Academy Award nominee, stars as Father in “Father Thing”, written and directed by Emmy award winner Michael Dinner (Sneaky Pete, Justified, The Wonder Years) [SQUEE x 3] who also serves as executive producer on the series. In this episode of Philip K. Dick’s Electric Dreams, the world is under attack as aliens quietly invade our homes. Charlie (Jack Gore – Billions, The Michael J. Fox Show), our young hero must make the most difficult decisions imaginable, to protect his Mother, played by Mireille Enos (The Catch, The Killing, World War Z) and the human race, as he is among the first to realize that humans are being replaced by dangerous monsters. Charlie’s father (Kinnear) is a caring, loving man with an easygoing manner, he has a great enthusiasm for baseball which he shares with his son, whom he reminds regularly that "all that matters is who you are...what you are on the inside." But when the Father Thing attempts to be just like his dad, his son is not fooled for a second. As much a gut-wrenching view of a child losing faith in his father, as it is an energising battle to save humanity from alien invaders.

Commissioned by Channel 4, who will air the series later this year in the U.K. and by Amazon Prime Video for the U.S., Moore and Maril Davis of Tall Ship Productions and Michael Dinner of Rooney McP Productions are executive producing alongside Bryan Cranston and James Degus of Moonshot Entertainment, Isa Dick Hackett, Kalen Egan and Christopher Tricarico of Electric Shepherd Productions, David Kanter and Matt DeRoss of Anonymous Content, Lila Rawlings and Marigo Kehoe of Left Bank Pictures, Don Kurt and Kate DiMento in association with Sony Pictures Television.