Book - Get Lit on Lit: No Country for Old Men 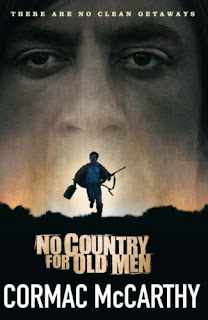 They say you learn something new every day. Thanks to our resident teacher, Mr Ames, you can tick off today's lesson and rediscover a classic book as he encourages us to get lit on Lit. and discusses Cormac McCarthy's No Country for Old Men...

It has been a while since I have had a chance to talk about literature so I wanted to cover something that I think is widely misinterpreted. Cormac McCarthy, the greatest American writer of the past fifty years, has blessed the world with multiple novels of immense power. He is known for Blood Meridian or the Evening Redness in the West, Outer Dark, Sutree, and All the Pretty Horses. He also won a Pulitzer Prize for his unflinching and transcendent novel The Road in 2006. The novel I am going to talk about today is his famous 2005 novel No Country for Old Men, made even more famous by the amazing adaptation of the Cohen Brothers in 2007 (which was the recipient of four Academy Awards). I don’t want to ruin the novel for anyone because it is an experience. It was reviewed by our own Nate Mackenzie for The DreamCage so if you want a full review, check that out. This will be more about the final scene in the book/movie.

When I went to see the film in the theater, I was blown away by how accurately the directors had recreated the novel. Of course the incredible acting by Josh Brolin and Tommy Lee Jones truly helped but it was nailed home by the portrayal of the novel’s villain Anton Chigurh by Javier Bardem (he won the Academy Award for best supporting actor for his work). Chigurh is easily my favorite book and film villain for multiple reasons but one in particular: he is strangely realistic for being such a murderous and systematic killer.

The entire novel focuses on the idea that the world is growing more and more violent as the years pass and that there is no room left for the men who came before. The world has surpassed them in darkness and very little the old world can accomplish could make a difference in a world that is increasingly violent and scary. The novel is punctuated by little frames of narrative from Sheriff Ed Tom Bell who gives commentary on what is/has happened. He is the ageing lawman who feels as though he no longer can compete with the modern world and he may truly be right. He tells the reader about his past, his shortcomings in the military, and his undeserved accolades in war which have led him to become the insecure, scared old man we see. Also, throughout the story we learn that his father was a fearless lawman who was unafraid to confront the world, even as it ended up killing him.

When the film cut to black, I heard multiple audience members scoff and complain about how the ending was worthless, didn’t make sense, was stupid, etc. All of the common complaints when something incredibly philosophical goes over the heads of people who either didn’t or refused to grasp the concept. THAT is what we are going to discuss here today.

The very last scene in the novel is Bell sitting at his table with his wife, days after he has retired from the force. He was never able to capture Chigurh who has disappeared into the ether as he does so well. Bell retired and now feels like he has no purpose. He talks about his father and the two dreams about his old man he has recently had. At the end of his second description the novel ends. It is a questionable ending and has caused a lot of confusion but I want to discuss the utter power of the last few lines.

Here are the dreams as McCarthy writes it:

I had two dreams about him after he died. I dont remember the first one all that well but it was about meetin him in town somewheres and he give me some money and I think I lost it. But the second one it was like we was both back in older times and I was on horseback goin through the mountains of a night. Goin through this pass in the mountains. It was cold and there was snow on the ground and he rode past me and kept on goin. Never said nothin. He just rode on past and he had this blanket wrapped around him and he had his head down and when he rode past I seen he was carryin fire in a horn the way people used to do and I could see the horn from the light inside of it. About the color of the moon. And in the dream I knew that he was goin on ahead and that he was fixin to make a fire somewhere out there in all that dark and all that cold and I knew that whenever I got there he would be there. And then I woke up.

First we should analyze the symbols presented by the author. One prevailing symbol that McCarthy uses in multiple novels (namely The Road) is the fire. To McCarthy it seems it represent the goodness inherent in human existence. That fire is so important to maintaining humanity in a dark world. Another symbol present is the horn in which the fire is carried. As Bell states, the horn was used to carry fire in the long forgotten past. That will be important later in the analysis. For now, just note that the horn is representative of times gone passed.

Now, as we have discussed, Bell feels somewhat lost since he has retired. His purpose as a lawman is now over and although he survived, the entire novel just went to prove how out of his depth he was in the modern world. It was wholly a loss on his part and because of that, he feels even more lost than before.

The dream serves as a sort of message to Bell that he has truly lost his purpose and that the world is for him no longer. Look at what he describes: He sees his father ride by on a horse carrying fire out into darkness and cold and he was preparing to build a fire and that if Bell went along, his father would be waiting for him. That is a simple summary of the dream. Now, if we look at the whole thing as a metaphor representing Bell’s veritable impotence in his job and his spirit later in life, the dream seems to mean so much more.

His father was a lawman without fear who ended up taking on crime without fear and although it cost him his life, he was a true hero. Bell however was a coward who was treated as a hero and never got over that fact. His father rides by on a horse, looking younger than Bell because he died as a young man. He is carrying the fire, human kindness, strength, and justice, in a horn representing the strength and courage of the old lawmen. He rides by and Bell watches him go. He says that he knows his father is “fixin to make a fire somewhere out there in all that dark.” His father was never afraid of the world and regardless of how scary or violent the world became, his father fought with everything he had to maintain that goodness. He was out there waiting in the world and Bell knows that if he just followed in his father’s footsteps, he could find that fire and live like his old man. Sadly, Bell wakes up before he can because he has retired from the force and he will never be able to go out into that darkness to help maintain the goodness and strength his father represented. Instead he ran the other direction and now, with his retirement, the chance to live up to his father’s legacy, to become one of the true good guys, to fight the darkness of a modern world has slipped through his fingers. He is an old man and the new world is too dark and violent a place for him. It truly is No Country for Old Men.

In essence, the last dream really exemplifies the meaning of the work as a whole. The last dream is a powerful image portraying the failure Bell feels as a retired Sheriff in a world that has passed him by.