Book - Matlock the Hare: The Riddle of Trefflepugga Path 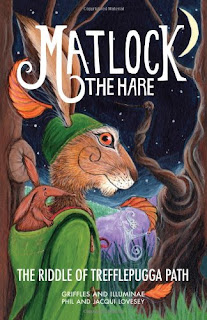 Our own most majelicus pisky, Romeo Kennedy, reads Matlock the Hare: The Riddle of Trefflepugga Path by Phil and Jacqui Lovesey...

I was first made aware of this book by the #FolkloreThursday hashtag event that takes place on Twitter every week.

Animal Fantasy is my thang, as is well known, so I immediately wanted to read about the adventures of the most saztaculous Matlock the Hare in The Riddle of Trefflepugga Path.

Here is the synopsis.

When Matlock the Hare’s beloved home of Winchett Dale is threatened by the arrival of a mysterious stranger, the only way he can save the dale is by taking a perilous and twizzly journey along Trefflepugga Path - a journey that will test all his majickal abilities to the very limits

As he sets out along Trefflepugga Path in an adventure that will change his destiny forever, from the very first pid-pad he takes. And then perhaps, griffle yourself the question; just where would Trefflepugga Path take you...?

Written by Phil and Jacqui Lovesey, TRoTP is a beautifully written book and with the addition of Dalespeak, makes it that much more of a special read.

At the beginning of the book there is guide for the intrepid traveller should they venture off the beaten track and find themselves on Trefflepugga Path, as well as a handy phrase book for Dalespeak, (the dialect of Winchett Dale) there is also an extensive glossary at the back of the book featuring words such as shindinculous, which means something very wonderful.

Its a fun dialect for certain, although to begin with I found it a little tricky to get to grips with and had a few trips to the glossary to make sure that I didn't gobflop it up.

But once I got past a few chapters it was peffa simple to get to grips with.

Not only is the book beautifully written, but it is also beautifully illustrated both the cover, the map (I do love a good fantasy map) and the narrative are essential ingredients in making Matlock the Hare what it is, as a side note, it baffles me that this book (and the others in the series) have not been snapped up by a traditional publisher. As well as our intrepid hero, the cast of characters are all well fleshed out and all are very memorable as is the overall story.

It is an intriguing novel and one that Is suitable for all ages. Especially if, like me, you are a fan of Animal Fantasy (Redwall, Rats of Nimh, Watership Down etc) you will be wanting to follow the hare on his adventures.

A wonderful fantasy story with something for everyone. The Riddle of Trefflepugga Path is out now.