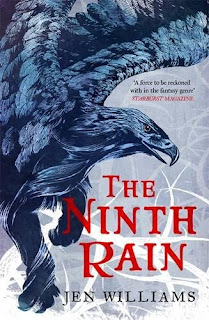 On a Bank Holiday Monday in the UK, we always expect at least some rain. So Romeo Kennedy read The Ninth Rain by Jen Williams...

Ye Gods and little fishes! The start of a new series from the wonderful Jen Williams.

It is no secret that I’am rather a big fan of Williams’ Copper Cat Trilogy, but this is an all new story with all new and shiny characters.

Here is the synopsis,

The great city of Ebora once glittered with gold. Now its streets are stalked by wolves.

Tormalin the Oathless has no taste for sitting around waiting to die while the realm of his storied ancestors falls to pieces - talk about a guilt trip. Better to be amongst the living, where there are taverns full of women and wine.

When eccentric explorer, Lady Vincenza ‘Vintage’ de Grazon, offers him employment, he sees an easy way out. Even when they are joined by a fugitive witch with a tendency to set things  on fire, the prospect of facing down monsters and retrieving ancient artefacts is preferable to the abomination he left behind.

But not everyone is willing to let the Eboran empire collapse, and the adventurers are quickly drawn into a tangled conspiracy of magic and war. For the Jure’lia are coming, and the Ninth Rain must fall...

Jen Williams is a master at creating epic adventure stories, with characters that the reader connects with from the outset. Her stories have such attention to detail and nothing is frivolous. There is a line from one of Lady Vintage De Grazon’s letters that says, “How to unpick a tapestry such as this?”

And that is William’s work. A fine fantasy tapestry, that readers will want to revisit over and over, to make sure that they haven’t missed anything, and discovering something totally new. Her world-building skills are so comprehensive that if one were to fall in the world of Sarn, one would know precisely what street they were on (as long as it's not in the Wild.)

Something about the horrifying Parasite Spirits reminded me of the Final Fantasy movie from the early 2000’s. But on a much more terrifying scale. Touch a parasite spirit and it's quite a nasty end.

Without spoiling it too much, the Jure’lia, or Worm People that seem to not leave Sarn or its citizens alone, are more than a formidable enemy, as with the Parasite Spirits the many different species of Jure’lia are more than frightening, particularly with what they have in their arsenal. The Varnish is especially frightening with people fleeing from the Worm People in The Eighth Rain, covered in a viscous fluid, preserving their fear for eternity.

If you have read The Copper Cat trilogy you will know by now that not only does Williams’ create great heroes, but she makes absolutely terrific villains. The Jure’lia are no exception as are the awful part religious cult/jailers of the Winnowry, who imprison young gifted women to purge them of their sins by making them use their winnow fire to produce something valuable, whilst constantly berating them and abusing them.

Whilst there is so much detail in the beginning part of the tapestry, we see but a glimpse of what Williams’ has in store for the readers. With some stunning revelations at the climax of this first tome of the Winnow Fire Trilogy, The Ninth Rain is the beginning of something truly exciting and one hell of an exploration.

The Ninth Rain is out now from Headline Books,