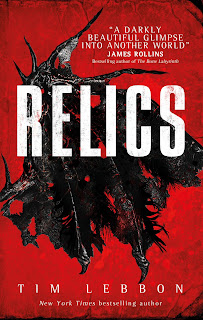 Our resident pisky checks to see if he knows anyone on the shopping list as Romeo Kennedy reads Relics by Tim Lebbon...

As a Pisky, I had serious concerns about Tim Lebbon's new novel, Relic.

So much so that I almost called upon the forces of the High Brigade of Badgers to put a plan of action together and put a stop to the illicit trade of gryphon wings, Cyclops' and other deceased magical creature parts, on the black market.

Read this witness statement to learn more...or as you humans call them seeenopsis!

(Reader, if you dare there be lightish spoilers ... Beware)

Akin to the trade in rhino horns or tigers’ bones, this network traffics in remains of gryphons, faeries, goblins, and other fantastic creatures.

When her fiancé Vince goes missing Angela Gough, an American criminology student, discovers that he was a part of this secretive trade. It’s a big money business - shadowy, brutal, and sometimes fatal. As the trail leads her deeper into London’s dark side, she crosses paths with a crime lord whose life is dedicated to collecting such relics.

Then Angela discovers that some of these objects aren’t as ancient as they seem.

Some of them are fresh.


The search for the love of her life brings all sorts of unknown truths to Angela and in frightening proportions.

It is a slow burn novel but once it hits that third act, my goodness does it really kick into gear.

I loved how Tim Lebbon lets the reader take a glimpse of this fascinating underbelly of supernatural trading. Of course within this there were some really horrific elements, especially centered around what goes on in the home of underworld mega-gangster, Mary Rock. Made this Pisky feel a bit queasy, and I won't even mention what happened to the spriggans when they read Relics, needless to say the spriggans ordered an obscene amount of nightlights and cushions to hide behind.

The story unfolds through the eyes of our human characters but also Lilou the nymph who is a very instrumental character in the respect of how, through her, she brings both worlds crashing together. Of course Vince, Fat Frederick etc are more than aware of the trading of dead supernatural creatures and Angela is made aware of it when she meets Fat Frederick in the Slaughter House but it is through Lilou that all eyes are opened very wide to how The Time (as it is referred to) is far from over.

Of course it has to be said that the real hero of the story is the pixie Thorn, and is a firm favorite of the Cornish Piskies .

Relics opens the door to an exciting trilogy by Tim Lebbon. A slow burn maybe but an exciting read from start to finish.

And more importantly, pisky-approved, as long as it is not real ... It is all made up ... Right?

Relics is out now via Titan books.