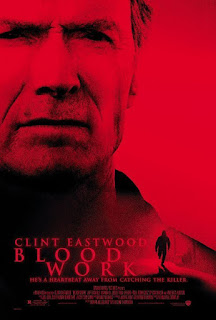 
Blood Work is one of those films that never seems to get a mention when Clint Eastwood is the topic of conversation. I don't know why. It came during a really rich vein of form in Eastwood's career, starting with Absolute Power a couple of years before and not really ending, has a great storyline, older investigator suffering heart problems etc, great cast, I don't understand why folk don't like it. Perhaps I'm doing you a disservice and you just missed it first time around and you'll immediately go buy a copy?

Remember how you said I was your friend, and I could tell you the truth? Well I don't need you at all.

Retired FBI profiler Terry McCaleb (Eastwood), who has recently had a heart transplant, is hired by Graciela Rivers (De Jesus), to investigate the death of her sister, Gloria, who happens to have given McCaleb his heart. On the case, he soon deduces that the killer, who staged the murder to look like a random robbery, may actually be a serial killer Terry was trailing for years in the FBI. Can the elderly and feeble McCaleb, who had intended to spend his retirement living on his boat in the Los Angeles harbor, and who can't drive, and has to nap regularly, muster up the endurance to find the killer?