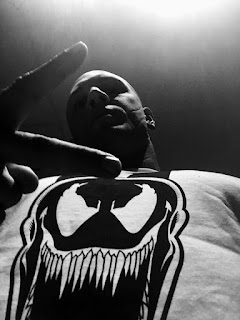 The Venom film seems to be coming together nicely...

Fresh from his stint on CBeebies telling stories to mothers...er...toddlers, Tom Hardy has been confirmed as taking on the role of Eddie Brock in #Venom, the upcoming film from Sony’s Marvel Universe slated for release on October 5, 2018. The news was accompanied by the picture above of Mr Hardy in a Venom t-shirt on Sony's official social media yesterday. Apparently Tom Hardy has been turning down roles in comicbook films left right and centre since his stint as Bane in The Dark Knight Rises as nothing really caught his interest but he is said to be a huge fan of the Venom character from the comics and, given his undoubted ability playing characters with darker souls, this could be an incredible match-up.

Down to direct the film is Zombieland's Ruben Fleischer, who also directed a couple of episodes of Santa Clarita Diet this season. He has been considered in the past for comic book movies like Ant-Man and Ghostbusters 3 so it will be interesting to see what he does with the story. Another snippet that keeps us interested is that the Venom film is NOT being treated as a Spiderman spinoff by the studio but is a completely stand-alone film in the Sony Marvel Universe. However, that excitement is tempered by the writing team of Scott Rosenberg (Jumanji) and Jeff Pinkner (The Dark Tower) as the darkness and character subtlety needed for Venom may not come across quite as well as it needs to - at least, if trailers for The Dark Tower pan out as we expect them to. However, we shall wait and see and, tbh, Tom Hardy could read the phone book (or children's stories) and add character depth to it.

We shall keep an eye on developments.