Film - What If? A Brat Pack on Elm Street 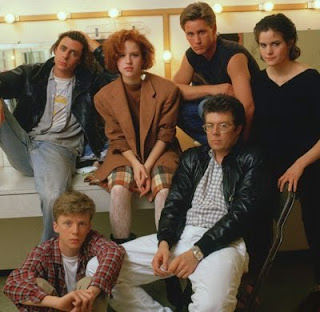 We all know Steve Taylor-Bryant has a bit of an obsession with the cool kids of the 1980's but this time he goes too far as he Brat Pack's up a film that maybe he shouldn't have touched...


Ah yes, my Brat Pack obsession. After far too many beers, and having looked at Molly Ringwald posters for longer than is healthy at 41 years old, I had a brainwave! What did the Brat Pack do really well? Coming of age teen films. Who was the best Brat Pack director? John Hughes. What film should we cast the Brat Pack in, directed by John Hughes, that none of you can see coming but will leave you in awe of my genius? A Nightmare on Elm Street! No, wait...come back! Please just hear me out.

John Hughes, considering the love we all have for him, directed only a handful of films but was a prolific writer. He took his own awkward childhood and made growing up, school, friendship and love entertaining and it's no surprise that members of the Brat Pack appeared all over his films as they were the generation he was writing about and they had an affiliation with his ideals. But What If? What about taking a classic horror film and adding in the complexities of youth?

Elm Street High School, in Shermer, Illinois, is being taken over by a mystical figure that haunts the dreams and emotions of its alumni. Fred Krueger (Rob Lowe) was a high school drop out that tormented the younger children in his school before disappearing. School legend has it that the parents of the tortured children beat Krueger to death for the bullying he inflicted on their children and he is back in their dreams to make them suffer for the action of their parents. Tina Grey (Molly Ringwald) and Nancy Thompson (Demi Moore) are the first to think that maybe the parents are hiding a dark secret and, along with Nancy's boyfriend Glen Lantz (Emilio Estevez) and Tina's beau Rod Lane (Judd Nelson), set off to investigate. They can’t figure out if Fred was actually killed or just warned off by their folks but strange occurrences in the school canteen and the local library certainly start to freak out the teens.

When Tina goes missing both Rod and harmless stalker Kevin Dolenz (Andrew McCarthy) are arrested and Nancy becomes incredibly scared that she may be next when her boyfriend Glen and his quarterback friend Brian Johnson (Anthony Michael Hall) also don’t appear at the regular music listening session at the vinyl store. Nancy manages to get Rod and Kevin out of jail and they set off with cheerleader Allison Reynolds (Ally Sheedy) in search of the mystical Fred and the missing teens. They stumble across a blues bar where they find Fred, Glen, Brian and Tina rocking out to Huey Lewis and the News. The film ends on a freeze frame of a relieved Nancy.

See? It is actually possible to mix John Hughes and horror and there was you waiting to see a car wreck of an idea...shame on you.