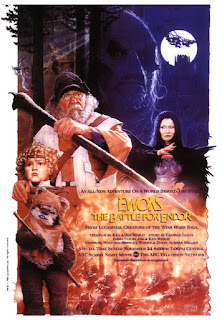 Our small band of Gunters here in The DreamCage universe are reviewing every film mentioned in Ernest Cline's Ready Player One. This week Alwyn Ash takes on the Battle for Endor...

As reviewed previously, 1984 Star Wars spin-off Caravan Of Courage: An Ewok Adventure left a vastly positive impression on my childhood. I was in love with Ewoks, owned most of the Kenner action figures in the 1980s and do consider Return of The Jedi to be my favourite of the original trilogy. The funny thing is I recall seeing Ewoks: The Battle For Endor, the 1985 television movie sequel to Courage, on VHS cassette in a video rental store back in the day. For some reason it wasn't picked up and taken home for a viewing. Perhaps my father refused to rent it out - I never received any pocket money so always had to rely on parental generosity on occasions such as these. In some ways I am now grateful the events of The Battle For Endor were unseen by my younger eyes. How heartbreaking would it have been to witness Cindel Towani, recently reunited with the parents she helped rescue from the Gorax lair in Courage, become an orphan and lose her older brother Mace (Eric Walker) in a Marauder attack on the Ewok village? Cruel, and so unnecessary, clearly bruising the happy ever after nature of the previous instalment's conclusion, in my opinion. Still, I promised myself a fresh look at this fantasy sci-fi classic and so DVD disc at the ready...


Escaping the Sanyassan Marauders (who have already captured many Ewoks and are transporting them to their castle), Cindel and Wicket meet up with Teek, a tiny furry rodent-like, simian creature with a faster than light drive installed in his rear - in other words, he can move with incredible speed thanks to an accelerated metabolism. The friendly but mischievous creature leads them back to the hut he shares with Noa Briqualon (Wilford Brimley), a shipwrecked space trader. At first the old man refuses to let his new guests stay, but eventually shows a softer side. Think Heidi (another orphaned little girl created by Swiss author Johanna Spyri) and you get the idea. Besides, who could resist Cindel's porridge and muffins?

One morning the young girl hears a song, the very song her mother used to sing to her, coming from somewhere close by. Investigating, she encounters a beautiful young woman with a white horse. It is, of course, a trap - the woman transforms into Charal, a Nightsister and witch who serves as second-in-command to the Sanyassan warlord who ordered the attack on the Ewoks. Cindel is taken to the castle also as a prisoner. Once there, she learns that Terak (the warlord) wants her to activate a crystal oscillator from a wreckage, believing it will bring him great "power". His lack of knowledge regarding general technology proves him to be an ignorant savage. One wishes a Jedi Knight would rise to show him what true power looks like. Neither Cindel or Charel are able to meet his demands, and are both imprisoned with the Ewoks. Noa, Wicket, and Teek make a daring rescue by scaling the walls and infiltrating the heart of the Marauders.

The rescue storyline is comparable to its predecessor though clearly lacking in similar scale and ambition. The Marauders make a poor army and the overall direction feels clumsy. Directors Jim Wheat and Ken Wheat fail to really bring anything new to the table - at least Caravan had the Gorax, evoking thoughts of those early monster features that displayed Ray Harryhausen's work. Hard to believe that the Wheat brothers would go on to write the screenplay for Pitch Black (2000), one of my favourite movies starring Radha Mitchell. I am also a little surprised by Wilford Brimley, who I adore in Cocoon (1085) but fail to enjoy in the role of Noa, he just doesn't feel right in the part. Perhaps it has more to do with the feeling that the character isn't particularly significant, the film instead needing a much stronger Obi-Wan Kenobi-esque hero to lead. Imagine Alp-Öhi (Heidi's grandfather) with a lightsaber. In an interview with Eon Magazine, Ken Wheat said of the movie, "Lucas guided the creation of the story over the course of two four-hour sessions we had with him. He'd just watched Heidi with his daughter the weekend before these took place, and the story idea he pushed was having the little girl from the first Ewok TV movie become an orphan who ends up living with a grumpy old hermit in the woods. We'd been thinking about the adventure films we'd liked as kids, like Swiss Family Robinson and The Seventh Voyage of Sinbad, so we suggested having space marauders, which was fine with George - as long as they were 7 feet tall, of course! The rest of the brainstorming was done along those lines. Joe Johnston (the production designer and second unit director) and Phil Tippett (the creature supervisor) were involved in the second day's story session, and they contributed an assortment of bits and pieces".

Undoing the good of the first instalment to fit Cindel into the Heidi role is very unfortunate, as they could have easily cast a new young actress for an altogether newer role. That said, Aubree Miller is a sweetheart and it is rather nice to see her again, especially as Cindel's friendship with Wicket the Ewok continues to grow. Wicket W. Warrick has been played (in costume) by Warwick Davis in all three Stars Wars movies to feature him, but did you know that it was Darryl Henriques who voiced Wicket in the two Ewok spin-off films? The actor is best known to sc-fi fans as the Romulan Ambassador Nanclus in Star Trek VI: The Undiscovered Country (1991). Personally I'm still wondering why Lucas had Wicket talk at all, you don't have to understand a pet dog to be its friend and life companion.

There are many Star Wars fans who loathe Ewoks and their movies, who feel Return of The Jedi (1983) would have been a much better chapter without them. So perhaps I'm in a minority for liking the residents of the Moon of Endor? I just can't help embracing fond childhood memories. The fact that Battle For Endor was not part of that nostalgia might explain my dislike for the story, it's entirely possible.

Remember Daffy, the cross-eyed Gremlin from Gremlins 2? Well Teek quite reminds me of him. There's always one goofball who steals the show, though there isn't anything particularly stupid about him. He's clearly intelligent and loyal, playful and kind. Originally intended to be a puppet, the character was eventually portrayed by Niki Botelho. Actor Brimley had refused to work with a puppet and the quick decision was made to fit someone into costume - sixteen-year old Botelho was chosen from set.

Ewoks: The Battle for Endor premiered as a television special on 24th November 1985. It saw a limited UK theatrical release in the Spring of 1986. It was later released on home video in 1990, and on DVD in 2004 as a double feature paired with its predecessor Caravan of Courage. Neither film are considered canon since Disney's reorganisation of the franchise, I believe, which is a shame. Ewoks: A Star Wars Story would go so nicely with the company's current run of spin-off material. At the very least they should be given a re-release on bluray. I am sure many would rather see old copies burn alongside the body of Anakin Skywalker on his funeral pyre. That's the fun thing about fandom - we are all different...