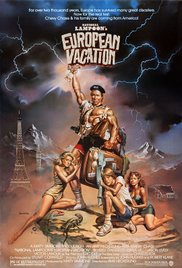 Our small band of Gunters here in The DreamCage universe are reviewing every film mentioned in Ernest Cline's Ready Player One. This week Susan Omand goes on a European Vacation...

Oh, John Hughes, what were you thinking?

Written the same year as the genius that was The Breakfast Club and the not so genius but still good fun Weird Science, National Lampoon’s European Vacation was SO out of character for a John Hughes film that it makes me wonder if he just wrote it for the money or was there actually some creative intent involved. I have, by the way, forgiven him for writing the original National Lampoons because it, at least, was an original concept at the time – taking a family across America in a car and watching their dynamics change as the situation gets ever more outlandish. Directed by Harold Ramis and given an R/15 rating, it was what you expected it to be. Crude, stupid and snortingly funny for a 15 year old who’d had a fairly sheltered upbringing to that point. And, incidentally, the fifth film in the series (yes, there were five. Just don’t.) was written and directed by John Francis Daley – Dr Sweets from Bones. Who’d’a thunk it?

Anyway, I digress. Fast forward 2 years from the original and we get this – the European Vacation.

For those that don’t know, The Griswolds (Chevy Chase and Beverley D’Angelo with Dana Hill, recast from another Dana, Dana Barron, as daughter Audrey and Jason Lively, recast from the wonderful Anthony Michael Hall in the first film, as son Rusty) accidentally win a gameshow question and get an all expenses paid European trip as a prize, travelling to London, Paris, Germany and Rome. And... that’s really it. They drive around and get into scrapes by upsetting the locals, misunderstanding the language and culture and generally wreaking havoc in a hire car.

I think what went wrong for me is that the stupid outweighed the funny this time out. The concepts were tired, the nudity and crudity wasn’t unexpected and they seemed to be trading on cool locations and star cameos to try to make the slapstick seem fresh and new. And boy did they throw names at it – Mel Smith, Robbie Coltrane, Maureen Lipman, Eric Idle, even “the Major” himself, Ballard Berkeley, and that’s just the London segment. Add in the legendary John Astin as the Pig in a Poke gameshow host (sidebar – can we add in his snogging the daughter Audrey as something the Was This Always Weird guys might want to talk about?) and an early outing by Moon Unit Zappa and I think the producers ran out of favours to call in. It could be that a different director, in the shape of Look Who’s Talking’s Amy Heckerling that meant the comedy timing changed... I dunno, I’m just guessing. What I do know though is that I remember thinking back in the day that this one wasn’t a patch on the original and, thirty-something years later, my opinion hasn’t changed. But I watched it again. So you don’t have to. You’re welcome.