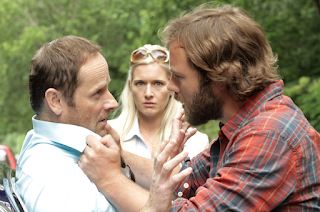 OK, I never saw that coming.

Gridlock is an Irish spin on an American style thriller, set during a traffic jam on a narrow country road. When Eoin's (Moe Dunford, Vikings) young daughter Emma (Robyn Dempsey) goes missing from their car, he forms a desperate search party to find her. But as panic takes hold among the other drivers, the search for a missing girl quickly descends into a frenzied witch-hunt, where no one is above suspicion.

This is a really tense, and intense, short film. The premise is simple, as a child goes missing from her father’s car, but is superbly written by Darach McGarrigle and incredibly effective as suspicion shifts from one person to the next to the next in the queue of traffic. This sense of tension and discomfort is set up very well from the start, with the implication of an argument between Eoin and his ex, which is why the daughter is in the car in the first place. This sense of anxiety is heightened by the frustration of the traffic jam and the physical shock of finding the cause of the jam, highly disturbing in its own right, pales as the girl is discovered missing and the mind games take over. There’s deliberate misdirection, making very good use of “stereotype” and expected behaviour thanks to some superb casting, there’s mistaken judgements, apologies, finger pointing and double bluffs. I really bought into all the characters and believed that each was dislikeable in such a way that would mean they could be involved in the girl’s disappearance.

Ian Hunt Duffy’s tight frame direction means that the sense of fear and confusion, and growing hatred, communicates very well to the viewer and our own discomfort grows as the agony of the father’s search is prolonged. There’s also a strong sense of almost claustrophobia, even though they are outside. There are high walls and hedges on each side of the road and trees beyond so you never get an “open” outlook.

This is not one of these “fun” edge-of-the-seat films but I mean that in the best sense. This feels real. You can’t see twists coming and you really don’t know what’s going to happen next. It’s a story that grabs you at the start and shakes you until you are disoriented and fearful, by throwing twist after twist at you, making you judge the characters and second guess your own thoughts as well as their actions. And that ending...