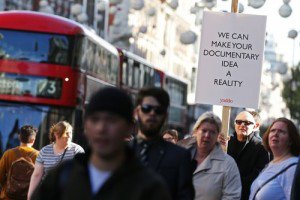 Documentary executive Nick Fraser is to be given a special award at the British Academy Television Awards on Sunday 14 May ...

Nick Fraser is best known as the former commissioning editor of Storyville – a post he held from its inception in 1997 until he stepped down in 2016. During this period, films from Storyville won a total of five BAFTAs, four Oscars, 15 Griersons, three Peabodys, and three International Emmys.

Not just known for his film work, Fraser has also written five non-fiction books, is a contributing editor of Harper’s Magazine, New York and frequent contributor to British newspaper The Observer. His recent pamphlet on the cultural importance of documentary filmmaking, Why Documentaries Matter, was published by the Reuters Institute for the Study of Journalism. He is currently writing a book about the history of documentaries and is honorary president of Sheffield Doc/Fest. After leaving his position at Storyville in 2016, Fraser founded documentary streaming platform Yaddo, which he is currently the editor of.

Krishnendu Majumdar, Chair of BAFTA’s Television Committee, said: “I am absolutely thrilled that the Special Award this year will be going to one of the world's key players in the field of documentary, Nick Fraser. Throughout his career, he has been dedicated to telling the stories which aren’t often heard and bringing these to new audiences - from his multi award winning thought-provoking commissions through Storyville to recently launching an innovative online platform for documentaries, Yaddo. It is no surprise that such ambition, creativity and originality will be recognised at the ceremony on Sunday.”

Nick Fraser said: “To be recognised by BAFTA for my work is such an honour, and I would like to thank the academy for this award. There is an increasing hunger for documentaries, particularly among young people, and it's time that they are put front and centre. They have come into their own as an art form and they help make sense of the world around us. I also want to thank those talented filmmakers that I have worked with along the way. We have made some incredible films together, and will definitely continue to make more in the future.”

The Virgin TV British Academy Television Awards will be hosted by Sue Perkins at the Royal Festival Hall, London, and broadcast on BBC One at 20.00 on Sunday 14 May, preceded by a live red carpet programme from 16.30 on Facebook.