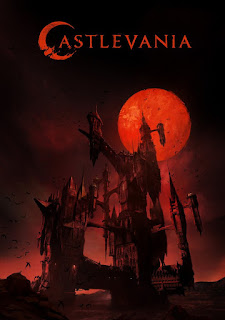 Watch the teaser trailer for the TV series Castlevania, coming to Netflix in July...

If you had a NES back in the day, you had Castlevania. That's just how it was - it was a flagship game of Nintendo consoles so you couldn't really NOT have it. In fact it wasn't available on any other platform until well into the 2000's when PS2 got a couple of the franchise titles - our own Defective Inspector played the PS2 version of Castlevania: Curse of Darkness again recently. So, with the resurgence in interest of Vampires, and a lack of original ideas, it was fairly obvious someone would try to adapt it for the screen in some way. That someone, it turns out, is Netflix and the trailer looks damned (no pun intended) good.

Inspired by the classic video game series, Castlevania is a dark medieval fantasy following the last surviving member of the disgraced Belmont clan, trying to save Eastern Europe from extinction at the hand of Vlad Dracula Tepe himself. The animated series is written by best-selling author and comic book icon Warren Ellis and executive produced by Warren Ellis, Kevin Kolde, Fred Seibert and Adi Shankar.

Things to note about this teaser trailer include:

* Blowing in the cartridge (had to be done even when it wasn't needed)
* The dodgy door on the NES (although, surprisingly this one is still attached at the hinges)
* CRT Television (none of your flat screen nonsense here)
* 8-bit Netflix - INCLUDING House of Cards promo pic!

And then, once we get past all the (superb but cheesy) nostalgia, some stunning anime (and dodgy accents but we'll forgive that). Definitely something to look forward to.