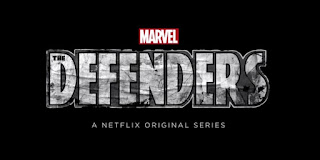 The first full trailer for the Marvel series, The Defenders, has been released by Netflix...

Marvel’s The Defenders follows Daredevil (Charlie Cox), Jessica Jones (Krysten Ritter), Luke Cage (Mike Colter) and Iron Fist (Finn Jones). A quartet of singular heroes with one common goal – to save New York City. This is the story of four solitary figures, burdened with their own personal challenges, who realize they just might be stronger when teamed together.

As well as the 4 main cast members, there will be recurring roles for Eka Darville as Malcolm Ducasse (the character he plays in Jessica Jones). From Daredevil, Scott Glenn as Stick, Daredevil's mentor, Elden Henson as Murdock's friend Foggy Nelson and his secretary Karen Page, played by Deborah Ann Woll. Luke Cage characters include Misty Knight, as played by Simone Missick. Carrie-Anne Moss as Jeryn Hogarth also has a regular role as does Sigourney Weaver among many others, so it's promising to be a star studded series.

The Netflix original series will launch globally on August 18th, 2017. Watch the trailer (which has some pretty cool music.)