TV - Dr Who and the Art of KISSing 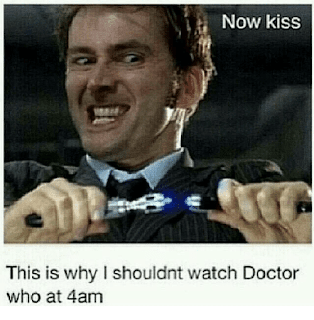 Pucker up! Reece Morris-Jones reckons that Doctor Who might have finally learned to K.I.S.S...

It's a real pickle eating humble pie. I've lambasted Doctor Who for the past few years on this site and others for failing to live up to its promise. Amongst friends I've made no secret of my belief that Peter Capaldi, an incredibly talented actor, has been under-served by poor direction and even worse scripting. And I've put it all at the feet of Steven Moffat, whose time on the show has resulted in such a decline in quality that it eclipses any other positive additions to the Whoverse he may have added.

Yet that same showrunner has now managed to produce five great episodes on the trot, a run I haven't seen since ...well, Eccleston.

Sure, five episodes isn't even half a season so there's plenty of time for it to go downhill (and looking at the previews for next week's show this may be the turning point). But despite that, it's one hell of a run - especially as it seems to have come out of nowhere after several seasons - that doubled down on the issues with the show instead of attempting to resolve them.

What's the secret to it? Other than someone waiting until Steven Moffat was off filming those shit Sherlock episodes before making this season? Well, its Keeping It Simple Stupid. The idea that to make a solid show you need to have the fundamentals right first and if in doubt, strip it back to basics, isn't a revolutionary concept. But it's harder to pull off than it sounds.

Yet... they've nailed it. The casting of relative unknown Pearl Mackie as Bill Potts is a masterstroke. The Companion is what defines each incarnation of the show as much as the actor playing the Doctor. Her instant chemistry with Capaldi* has punched up episodes that, on paper, should be average at best.

More importantly, the show has gone back to its bread-and-butter; the monster-of-the-week idea. It's paid instant dividends, especially when you realise it's a lot harder than it seems to create a menacing 'one and done' creature (does anyone really remember such self-proclaimed 'iconic' creations like the Fish-Vampires of Venice? Didn't think so). By making sure the show can master its basics, it has allowed it to better prepare an audience for season-spanning arcs.

Has it worked? Yes. By stripping things back and slowly introducing more complex elements, the show has so far felt like a slow build to something. All the better for the finale to shock and wow us. As a fan, I feel invigorated for probably the first time in years. What's more, I can point to these episodes as 'good Doctor Who', without needing to add caveats or explain some convoluted backstory before a non-fan will enjoy it. That shouldn't be a novel thing, but that it is fills me with hope.**

At this point it would be remiss of me not to mention just how much this season feels like it's been looking at the Russell T Davies' era with green eyes and taking copious notes. Some may have an issue with this, but frankly, the show has tried convoluted plots and arcs that it thinks are far smarter than they actually are in execution to limited success. If you're going to crib influences, why not rip off the format that revolutionised the show in the first place and try to build on it? Like it or not, RTD was the king of family writing whilst sprinkling in sadistic kills or the emotional equivalent of a kick in the teeth. Hell, he even managed to create a moment so influential to the show that this season has nabbed it and put it into the mouth of Bill; Billy Piper's pronunciation of the word 'chips'.

Will the show hold at or even exceed the standard it's set this season? I honestly can't say. But if it does, it will be because it learnt to do one thing: *KISS*.

*That Bill, a more traditional, 'slow' Companion,(that exists also to facilitate exposition) has been received more positively than more capable Companions like Amy and Clara is a discussion for another time and something I don't lay at Mackie's door. She's brilliant.

**Before Moffat crushes it from my heart as he has in the past.