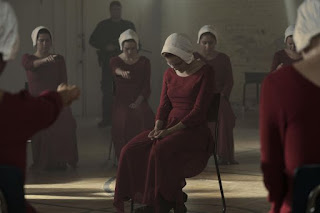 Ahead of the new US adaptation of The Handmaid's Tale coming to Channel 4, they have released a short interview with the original novel's author Margaret Atwood...

This US drama series, based on the award-winning, best-selling novel by Margaret Atwood, is the story of life in the dystopia of Gilead, a totalitarian society in what was formerly part of the United States. Facing environmental disasters and a plunging birth rate, Gilead is ruled by a twisted fundamentalist regime that treats women as property of the state. As one of the few remaining fertile women, Offred (Elisabeth Moss) is a Handmaid in the Commander’s (Joseph Fiennes) household, one of the caste of women forced into sexual servitude as a last desperate attempt to repopulate a devastated world. In this terrifying society where one wrong word could end her life, Offred navigates between Commanders, their cruel Wives, domestic Marthas and her fellow Handmaids - where anyone could be a spy for Gilead - with one goal: to survive and find the daughter who was taken from her. The series also stars Samira Wiley, Max Minghella, Yvonne Strahovski, O-T Fagbenle, Alexis Bledel, Madeline Brewer and Ann Dowd. In the first episode, Offred, one the few fertile women known as Handmaids in the oppressive Republic of Gilead, struggles to survive as a reproductive surrogate for a powerful Commander and his resentful wife. 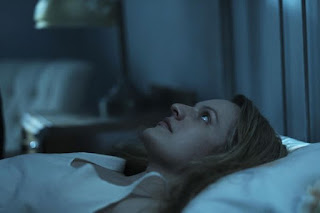 What did you think when you were approached about turning The Handmaid’s Tale into a television show?

Television productions these days are thoroughly developed, well written, and have high production value, which gives production companies the opportunity to delve deeper into novels than you would be able to do in a 90-minute film. You can build out characters and draw out suspense in a way that leaves people wanting to see what’s going to happen. Right now we are in a golden age for making novels into longer series.

Can you talk a bit about the context in which you wrote this book?

I started writing The Handmaid’s Tale in 1984. I wrote it for several reasons. First, I had a background in dystopian fiction and I had always wanted to write a novel that took place in a society different from ours, but with a female character as the narrator. I also had studied 17th century Puritan America, a theocracy -- not a democracy -- that, I believe, underlies America as its foundation. Finally, I was of an age to have seen various totalitarianisms come and go, and I never believed "It can't happen here."

My rule for the book was I would not put anything into it that human beings had not done at some time in someplace already in history. Everything in the book has a precedent. For instance, the Handmaids and women in general are not allowed to read. It was illegal for slaves in America to read, just for instance. You can go through all of the different pieces in the novel and ask me where in history it happened and I can tell you.

I was living in West Berlin at the time. It was an open city, but it was surrounded by East Germany. Every Sunday, the East Germans would fly supersonic planes that made booms just to remind us that they were there. As a Canadian, I could go into East Berlin, which I did. I also went into Czechoslovakia and Poland, both of them still Iron Curtain countries. At that moment, 1984, nobody thought the wall was going to come down anytime soon, but five years later, down it came.

When the novel was made into a film, we launched the film in both West and East Berlin because the wall had come down. It was the first time for a very long time – since before World War II – that such a thing had been possible. We showed the film in West Berlin and the conversation was about the direction, the design, and the acting. When we went to East Berlin, it was very different. The audience was quite silent. They watched it very intently and then they said, “This was our life.” They meant that they had lived in a country where they did not know who they could trust – that clamped down feeling of not knowing at any point who you might be talking to.

Can you talk a bit about the direction the show takes versus the book?

The television series follows characters that aren’t dealt with in depth in the novel, and sometimes the series shows events that aren’t in the book at all. In the book, the character called Ofglen (played in the series by Alexis Bledel) just disappears, and we don’t know what happened to her. It’s a very chilling moment. Offred -- the central character – goes out for her usual walk with her partner, since they have to go about in twos like nuns of old. She’s expecting the usual person to be there and it’s a different person. She says, “What happened to Ofglen?” This new person says, “I am Ofglen.” End of conversation. Offred can't find out anything else in the book, but in the series, we find out what happens to Ofglen.

What do you think about the series?

It is very strong. The actors are excellent – great performances – and the production value is high. The tension in the series is nail-biting: you feel on edge all the time because you have such an emotional connection to the characters, especially Offred. She is a person navigating a world in which she’s always under suspicion. In this world much is expected of Offred, and if she doesn’t produce, she’s out. The tension in the household where Offred lives is extreme, because there's a pyramid of power. At the top of the pyramid are the higher ranking males such as Commander Waterford, played by Joseph Fiennes. Second in rank are their Wives, but their power is limited. There’s a great scene in which the men all go into a room to make decisions, and the Commander's Wife has the door shut in their face, which says, “You're not allowed to be part of this anymore.”

Can you talk about the casting of the show?

Some of the actors and actresses the team chose for certain roles are surprising. In the book, the Serena Joy character and the Commander are older than they are in the television series. The younger casting makes for a lot more sexual tension and jealousy between characters that works pretty brilliantly in the series.

The production team decided to make the cast more diverse than the book. There are interracial relationships, for instance, whereas in the book, segregation is one of the regime's aims. The team also cast the Handmaids in all different shapes, sizes, colors -- all different kinds of people. I think the diversity works very well and is more accurate about where we are as a society now. That’s how it would be. With fertility at such a premium, having a functioning set of ovaries overrides any other considerations there might be.

What would you hope for people to get out of the series?

I hope that the audience will understand why it is so important to speak your mind while you can, and to vote - also while you can.