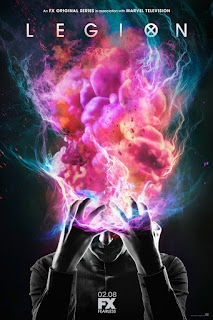 Mutating our understanding of mental health is on Reece Morris-Jones agenda today as he talks Legion...

Legion is unlike anything else on TV right now. Its focus on the arc of David, ‘the most powerful mutant on Earth’ is a complete departure from anything you would normally expect from one of Fox’s forays into presenting the X-Men franchise.


Not only does it have some of the most inventive and exciting cinematography of the past five years, (what show can claim it includes a silent film scene and reality manipulation via a detour to a man trapped in a giant floating ice cube?) its preoccupation with character’s inner lives and relationship dynamics -over flashy explosions - brings it significantly closer to the source material thematically than anything created by the studio before.

More compelling than that though? Its complex portrayal of the effects of trauma and how it affects everyone, even if in seemingly invisible ways. The superhero genre is no stranger to using the powers of its characters to disseminate allegory in amongst the action and Legion goes one step further by tying those powers into the emotional arcs of each character of the show.

The most obvious example is David: a powerful mutant whose powers are described as ‘potentially limitless’, his powers of telekinesis and telepathy are completely dependant on his mental state. Given his struggles with lucidity and mental manipulation at the hands of a shadowy entity that inhabits his very thoughts, David is misdiagnosed as schizophrenic by a medical body completely unequipped to deal with his condition, let alone his diagnosis. His struggles echo many real-life sufferers of mental illnesses, as they battle not just the effect their illness has on them, but the loneliness such severe conditions can lead to, as David cuts himself off from everyone he cares about.

He is given different diagnoses by people (you aren't schizophrenic, it's your powers/ it's a monster in your head/ you actually ARE mentally ill) and given different treatment methods by those who impose their own opinions of his illness, without ever stopping to consult with David to ask if these methods are actually working. The resulting confusion ends up obfuscating the true cause, until David, worn down, gives in to his worst impulses by letting the Shadow King take him over completely.

If we follow the established allegory, it's a clear exploration of how those with complex mental health issues can sometimes spend their whole lives being offered conflicting ‘solutions' until they are tempted to go ‘off meds’, usually to an end result of self-harm. Even when he ‘cures' himself of his illness by casting out the Shadow King with the help of his partner Syd, it's quite apparent that a lifetime of trauma, abuse and institutionalisation in facilities like Clockworks have left him with far more underlying issues, undercutting the damaging ‘love cures mental illness’ trope.

Other characters are no less compelling than our protagonist. The Shadow King, David's dark doppelganger is someone who has dissociated from physical form for such a long time that they have developed a borderline psychotic personality and see people less as individual living organisms but sources of sadistic amusement. Syd is a haphephobiac due to her powers and past traumas and lives her life slightly removed from others, but desperately desires the touch of David whom she loves. Cary and Kerry share the same body but can separate into individual beings when needed and have a level of co-dependency that leaves the other literally traumatised if either gets hurt.

Meanwhile the core of the group, Melanie, is trapped in the past. She lives in a shrine to her husband (complete with his automated voice echoing through the facility) unable to move past the trauma of his ‘disappearance’, to the point where everything has a timeless but vague 70s feel that traps in time the period he left her.

The only ‘healthy’ member of the group is Ptonomy, possessed with perfect recall from the first moment of his consciousness. He has been able to relive his past traumas (such as the death of his mother) many times, to the point where he has accepted them and resolved any issues that have arisen. But still, he lingers on his mother's death.

Does the show perfect all of its themes? Not quite. It falls prey to stereotypes at times and its sloppy resolution at the end of season 1 makes some of the arcs (like David's) seem less clear than they should.

But by showing that trauma is a continuum, as is mental health, we have a more nuanced take on these topics than most television shows allow us. Importantly, it shows that there is no ‘normal' when it comes to mental health, nor does reality provide a resolution that wraps up neatly in time for the season end. How the show will play with these themes in season 2 I don’t know. But the fertile ground dug by the show so far will allow for more avenues to be explored than anything offered by the X-men films ever will.