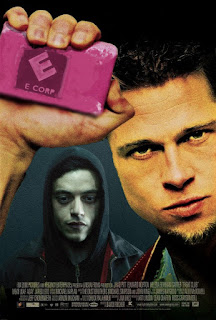 The first rule of Mr Robot is that Reece Morris-Jones argues that Mr Robot is Fight Club for the hacker generation...

Note - there are spoilers for Season 1 of Mr Robot discussed below...

I'm a bit behind culturally, but after a week off I managed to catch up on a few must see shows of the past few years. Which means I finally got around to seeing Season 1 of Mr Robot. It's a scintillating drama that pulls you in slowly as we get to grips with the world of the main protagonist Elliot. For those who haven't seen the show, we as the viewer (who Elliot is aware of and treats as a hidden collaborator) follow Elliot in his dual life.

By day he works as an office tech in a cyber-security start-up. By night he uses his skills to right wrongs and as part of the hacker group fsociety (headed by the enigmatic Mr Robot), attempts to rid the world of its dependency on corporations. How? By destabilising the world's largest conglomerate, referred to dryly as 'Evil Corp'.

From the sense of humour (dry, often blackly comedic) to the overarching plot of Elliot realising that Mr Robot is, in fact, an aspect of himself he has hallucinated to process past traumas and act out behaviours that his core personality never could. The parallels between Mr Robot and David Fincher's adaptation of Fight Club are apparent. Season 1 even caps things off in the same way as Fincher's cult classic, with the destabilisation of the world's economy.

Mr Robot reworks these motifs to create a more mature, measured take on them. In my opinion it does everything right that Fincher's Fight Club did wrong and ends up being closer to the themes of the novel than the Fincher adaptation ever achieved.

Fans of Fight Club have always prided themselves on the satire in the film - its dismissal of consumer culture and how this ultimately isolates and destabilises people from the grounding we need to function emotionally. But whereas the novel itself still carried that energetic, adolescent desire to tear it all down and start again, it differs from the film in one way: Tyler Durden. Like the novel, Durden is the epitome of all that's wrong with the traditional view of masculinity. He's charismatic with the body of Adonis, a misogynistic tough guy who rules with his fists and thinks men have been 'weakened' by a generation lacking traditional male role models. Whilst the novel makes enough attempts to show that Durden is a piece of shit, Fincher's adaption makes his toxic form of masculinity strangely appealing, even going so far as to make the unnamed narrator - played by Edward Norton - only able to 'beat' his psychotic alter-ego through the medium of violence.

Mr Robot, on the other hand, makes no effort to disguise how little you should trust Elliot or its titular character. Even if both are our 'heroes' and we become enamoured with their desire to do good and save the world, we're never allowed to feel safe with them. From Elliot's anti-social personality and tendency to stand still for minutes on end whilst his inner-monologue unspools, to Mr Robot's frequent outbursts and threats of violence (which he more than once follows through on), we aren't meant to fully like either of them. Nor are we meant to have a complete connection with either. The message of the show is clear: when the revolution comes, it won't be at the hands of some saint-like revolutionary; it will come from ordinary people. And people are messy, self-destructive and rarely who you want them to be.

Mr Robot also tackles the rampant sexism of Fight Club. I wouldn't argue this was intended as it was received by some of the film's fanbase - it's a part of what FilmCritHulk terms the 'allure of cool'. Fincher accidentally makes a a smart, incisive take on youthful nihilism - and how we need to grow past it to get shit done - and instead creates a film where the central focus and allure is the very thing it's trying to point out is flawed. Though Mr Robot doesn't always stick the landing, most of the female characters have their own lives, desires and arcs separate from Elliot's, even where they intersect. The show's about a group of like-minded individuals who care about one another, coming together to achieve a common goal, rather than being ruled over as in Fight Club. These people are imperfect (and always will be) and we see that their every action has consequences, their online smarts falling short in reality and resulting in the death of Shayla, whose only flaw was kindness.

Mr Robot inverts even the ending of Fight Club. In the film, its a yelled 'fuck you!' to society as we witness the world's banks topple before our eyes. The revolution complete, our character now whole. Yet we never witness the act itself in Mr Robot. It's an incidental event that happens between episodes, the show focused more on the aftermath than the child-like jubilation the act itself inspires. We witness fsociety no longer knowing what to do, Elliot even more isolated and confused than before, people we have grown to care about losing everything they know. Meanwhile the one percent carry on as before - uncaring of the few of their number they have lost.

Mr Robot is satire for a generation that has seen what Gen Xers' lack of regard for anything has led us to. It agrees there needs to be a revolution. But it points out that revolution is just the start and makes us ponder; will it be worth it?