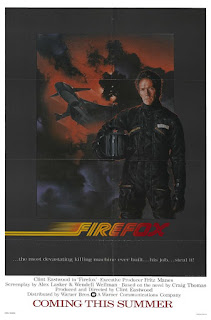 At the height of the Cold War films about spying and the dastardly Russians and the heroic Americans were two a penny. Lots were good, most were bad, none were as good as a British made spy film. Some were just meant to be watched and not overly analysed. Firefox was one such film. It's not a great spy film but considering the time it was made, early 1980's, and what they set out to achieve with unbelievable modern tech aircraft you have to have some love for the sheer audacity to try and make it. There is very few if any good modern war jet films around, even with the multi million dollar and CGI world with live in now. That's because they're so bloody hard to make. Firefox is another I watched with my grandad, another constant rewatch on my calendar, and happy memory of when a filmmaker tried something that is virtually impossible to do.

When the first rumors began to filter out of the Soviet Union some three years ago, our theoretical weapons strategists stood before NATO command to explain - with much confidence - that it would take the Soviets a minimum of ten years to develop a Mach Five aircraft with thought-controlled weapons systems. I stand before you today to explain - with much regret - that we were wrong.

The Soviets have developed a revolutionary new jet fighter, called "Firefox". Naturally, the British are worried that the jet will be used as a first-strike weapon, as rumours say that the jet is indetectable on radar. They send ex-Vietnam War pilot Mitchell Gant on a covert mission into the Soviet Union to steal Firefox.