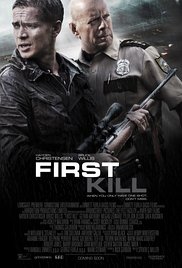 Yes, OK, we know. It looks like a "Bruce Willis Saves The Day" type film but give it a chance, it might not be. Watch the trailer for First Kill...

In order to reconnect with his son Danny, big shot Wall Street broker Will (played by Hayden "let's just forget about the prequels can we?" Christensen - yes that's really him, grown up some hasn't he?) takes his family on a hunting trip to the cabin where he grew up. While out hunting with Danny, the trip takes a deadly turn when they stumble upon several robbers and witness the murder of one of the criminals. After becoming entangled in a bank heist gone bad that results in the kidnapping of Danny, Will is forced to help the kidnappers (led by a suitably typecast Gethin Anthony who played the stunning role of serial killer Charles Manson in Aquarius so we do have hope for this film as he's good in things) evade the police chief (yup, guess who?) and recover the stolen loot in exchange for his son’s life.

Anyway, it gets a simultaneous cinema and VOD release in the States on 21st July so no doubt we'll see it over here at some point.