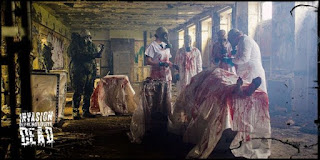 Watch a new, very NSFW (but it's a Saturday, so not much of a problem) trailer for Indywood Studio's cutting edge horror film Invasion of the Not Quite Dead...

Have you ever watched the Director's cut ... of a FILM'S TRAILER?!

Well, now you can as IOTNQD director "Crazy" AD Lane (read our recent personal interview with him here) has managed what many thought impossible and made his gory and edgy teaser trailer for Invasion of the Not Quite Dead now even gorier and edgier.

For those that don't know about the film or the project, here's the synopsis:

'INVASION OF THE NOT QUITE DEAD' is a brutal character driven story that takes place in and around a small suburban sleepy village called Little Grimsby. After 15 years away, Sam Peterson (Frank Jakeman) returns to try and fix his severely broken family, an ex wife who despises him, two sons who want him dead and a brother who wouldn't p*ss on him if he was on fire. This is the story of a once broken man who gave up on everything he loved in order to selfishly try for a better life and then after 15 years decided he wanted a chance at redemption, BUT... is he too late? Sam picked the wrong time to move back to Little Grimsby, a virus is sweeping the town, making the locals semi-insane and, when darkness comes, so do the 'NOT QUITE DEAD'

What sets this film apart from all the others though, as well as the great story, AD Lane's "no holds barred" direction and beautiful cinematography by DoP Josh White, are the special effects, none of which are computer generated. With the amazing work of make-up artist Kate Griffiths very much to the fore, some truly horrific gore and prosthetics have been created. Real fake blood has been spilled and real bones broken. Real cars have been blown up and real eyebrows singed. And much countryside has been enveloped by special FX guru Danny Allen of Rocktopuss Studios in that oh so creepy mist that is a must (mist?) have for all good horror films.

And it's also going to look creepily mistier soon thanks to their recent Finishing Funds crowdfunder.

AD Lane explains more: "One of the BIG things we desperately needed to do was upgrade our PRACTICAL FX super mist machine RIG, which we've now done & we've already starting shooting our big super mist scenes. Without the support from this campaign we'd not have been able to do so & begin shooting some of our more ambitious scenes..."

So, if you are a horror film fan and want more of what you see in the trailer below you can still pledge to the crowdfunder which is ON DEMAND at Indiegogo.