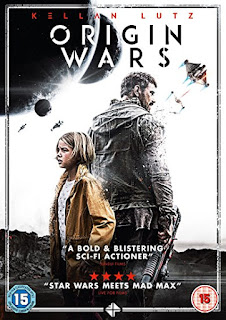 Being hailed as Star Wars meets Mad Max, Origin Wars comes out on digital, DVD and Blu-ray next month...

Set in the future in a time of interplanetary colonisation, Sy (Kellan Lutz, The Twilight Saga), escapes a brutal prison where mysterious experiments have been taking place under the watch of a savage warden (Temuera Morrison, Star Wars Episodes 2 & 3, Once Were Warriors). After orchestrating an escape, Sy meets Kane (Daniel MacPherson, The Shannara Chronicles), a lieutenant working for an off-world military contractor - EXOR, who have set in motion a plan to wipe out all life from the face of the planet in an attempt to cover up their crimes - when their terrifying “experiments” escape.

Now, the unlikely pair must work together to rescue Kane’s young daughter, Indi (Teagan Croft, Home and Away), and reach safety before it’s too late. Teaming up with a pair of rough-and-ready outlaws, Gyp (Isabel Lucas, Transformers: Revenge of the Fallen) and Bill (Luke Ford, The Mummy: Tomb of the Dragon Emperor), it’s a race against time for the group as they clash with EXOR in an attempt to escape while battling the savage creatures that roam the barren planet.