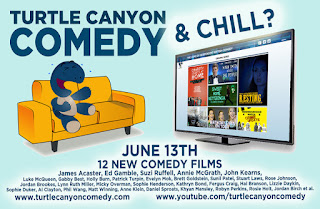 Just when you thought it was safe to come out of your shell again, Turtle Canyon Comedy release a dozen new comedy sketches...

In the spirit of binge viewing, all their new shows, sketches and short films got released at the same time yesterday so viewers can watch the shows they want to, or put on Turtle Canyon’s curated playlist and spend the evening watching some of the most unique comedy in the UK, including the first ever UK comedy sketch to be filmed in 360 degrees virtual reality.

Then, on Saturday 17th June 2017, Turtle Canyon Comedy embarks on its most ambitious project yet: a 6 hour livestream comedy event: There’s No I in Fishing. Pat Cahill, a keen angler will sit at a riverbank and spend the day fishing, filmed and broadcast by Turtle Canyon Comedy - no gimmicks, just slow TV at its slowest. 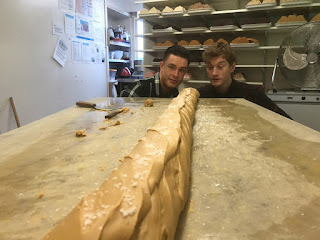 What to look forward to…

Just Puddings - Ed Gamble, James Acaster
Ed Gamble is a Type 1 diabetic but loves desserts, so he takes James Acaster to the Fudge Kitchen in Windsor to eat fudge, then describe it so that Ed doesn’t have to eat it.


Hope You Come Up Here (3 episodes) - Ian Smith, Kathryn Bond, Sophie Henderson, Fergus Craig
Inspired by Wish You Were Here Ian Smith shows you the attractions of his hometown Goole, and even manages to interview the UK’s youngest mayor Terence Smith.

One More Night - Suzi Ruffell, Rose Johnson
A stunning debut short film by Suzi Ruffell: breaking up with someone is much more difficult if they won't let it happen.

Biscotti - Patrick Turpin
A surprising cinema advert for the snack no one eats.

Sat Navs Will Kill Us in 360 VR - Micky Overman, Lynn Ruth Miller, Jordan Brookes
A regular car journey, a regular argument about whether to trust a sat nav, a map or a person. This one is with a twist: it’s filmed in 360 degrees virtual reality so the viewer can choose which way to look, making them the directors of the sketch. The first ever UK comedy sketch to take advantage of this exciting new technology.

“I’ve Lost YouTube” - Evelyn Mok, Sunil Patel, Sophie Duker
The start of a new series of sketches from Turtle Canyon Comedy - the cast are given one line of dialogue as a starting point and then improvise a sketch around it. They get two hours to work it out and have to keep it under two minutes.

I Am Wario - Stuart Laws, Anne Klein, Matt Winning
A unique from a unique sketch group. The premise is that every single sketch they do has the exact same punchline. A cult hit at Edinburgh 2016, this is their first filmed sketch.

There’s No I in Fishing - Pat Cahill
Live streaming on Facebook and YouTube on June 17th, this will be a unique and compelling show that will make six hours fly by. Viewers can dip in and out to watch Pat Cahill go fishing for the day, joined by some friends who will keep him company and take part in some angling.

You can watch the playlist below: