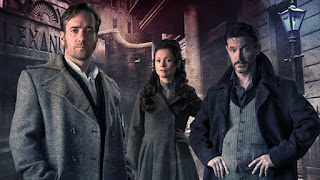 BBC Two heralds the return on Monday of Ripper Street for the fifth and final series. Find out more (immediate mega spoiler if you haven't finished series 4 yet) and read an interview with the series star Matthew Macfadyen...

The previous season introduced a new serial killer plaguing the streets of Whitechapel. Convinced that the murderer’s cannibalistic crimes were being covered up by another party, DI Reid and DI Drake’s investigation pointed to a trail of corruption that led them right to the heart of Scotland Yard – specifically Assistant Commissioner Augustus Dove (Killian Scott) and his bestial brother Nathaniel Dove (Jonas Armstrong). During an attempt to bring down the Dove brothers, DI Drake lost his life to serial killer Nathaniel, forcing DI Reid, CPT Jackson and ‘Long’ Susan on the run. Finding themselves on the other side of the law, they discover that revealing the truth about the unlawful siblings is not an easy task.

With a barbarous killer on the loose and a corrupt lawman leading the police force, DI Reid is unquestionably facing his toughest and most dangerous challenge yet. An epic battle on the meanest streets imaginable has just begun… Will DI Reid finally be able to restore peace and justice in Whitechapel?

Writer, Creator and Executive Producer for all five series of Ripper Street, Richard Warlow said “Saying goodbye to this world of Ripper Street and its characters is going to be a very strange thing; it's been five years of my life. From the beginning when I began writing, I had in mind a five series arc, ending with us sending our characters off into the twentieth century. I’m immensely proud we have been able to tell the story as we hoped, and equally proud that such a huge number of the original cast and the creative team have been involved every step of the way.” 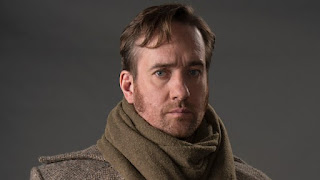 We catch up with Reid just days after the brutal murder of his long-time friend and colleague, Bennet Drake.

As if this was not enough to break him, Reid has found himself on the wrong side of the law - hunted down by Assistant Commissioner Augustus Dove for his role in the extra-judicial killing of Theodore Swift.

As the streets of Whitechapel echo with his name - terrible rumours circulating and reaching his daughter Mathilda, he fears - Reid knows that he must bring down the rotten heart that has installed itself in Leman Street, must prove the corruption of Augustus Dove, as well as the murderous guilt of his brother Nathaniel.

Bennet Drake’s death demands justice, and peace on the streets of Whitechapel must be restored. But how will Reid do this when he must simultaneously stay hidden from the police?

Where do we find Reid, Jackson and Long Susan at the start of Series 5?

They're all pretty shell-shocked really and they end up in the Alexandria, which is Mimi Morton's theatre, which she acquired and is in the process of renovating. That's where they hide out. And she allows them to sort of live there; they're on the run basically.

Reid desperately wants to pursue Dove but he no longer has the arm of the law. How does this feel?

It's such a rich setup to play, that Richard has created, this idea that Reid as a policeman is a pillar of the law is suddenly outside of it and he's gone rogue with these two. And certainly with a woman who he regards as a criminal. It's very complicated; it's very nuanced and interesting. There are moments when he feels very, very bleak and frustrated that he's unable to see his daughter and explain to her what's happened and it's difficult to see a way how he might be able to prosecute Dove, the real villain of the piece. But also I think there's a sort of freedom in having gone rogue - there's a part of them which thinks there's nothing left to lose, we're outside the normal conventional police world… it's good fun to play.

Was it harder for Reid to adapt to life on-the-run than it was for Jackson and Long Susan?

I think in a way Jackson is more serious than Reid in that he really wants to take his wife and his kid Connor, and start again and be happy: get away from Whitechapel. And it's Reid that is keeping him anchored because he needs him to get Dove; so there's a sort of reluctance there with Jackson and that's an interesting thing to have in the mix as well, as he's torn.

So can Reid trust Long Susan - a woman who once shot him?

I think Reid knows he's not a saint and he knows that she certainly isn't but I think he knows full well that she's not a bad person; she's just sort of ruthless. There's a real connection between Reid and Long Susan and there's a real understanding; they're friends despite everything.

Is Reid's stubbornness an issue for the trio?

He does have that, which is kind of admirable but also infuriating, and he does it at the expense of other people's feelings and situations sometimes. I think he feels a terrible guilt about it; I'm sure there's a guilt about Drake and the way he behaved towards him and perhaps he was quite thoughtless in his treatment of him in sort of investigating the [Rutowski] murders and the Isaac Bloom case.

How does Reid feel about Mathilda's relationship with Drummond?

That's been a real joy to play, all that stuff with Reid and Mathilda and they've had such an insane journey together. He thought she was gone and then they found each other and moved away to the seaside. Then he grew frustrated and wanted to get back really and now she's finding out things about her father that she didn't know, so I think Reid finds that particularly painful that he can't explain. She learns what he did to Horace Buckley who was her captor, but also her sort of captor father in a strange way. So she suddenly becomes aware of Reid's capacity for great violence and Reid is powerless to explain. It's a father not able to be with his daughter so she's very conflicted. And also she's falling in love with Samuel Drummond, so that complicates things and Drummond is very much on the side of Commissioner Dove because he's ostensibly a good man and his superior officer.

And how does Reid and Thatcher's relationship develop in Series 5?

When Reid comes back from Hampton-on-Sea, Thatcher's very much a cocky, brassy, bright young policeman but then it develops in a lovely way in Series Five because I think Thatcher - who you don't expect to be sympathetic to the outlaws' position - suddenly becomes a sort of wonderful ally to Reid, Jackson and Long Susan. It's lovely working with Ben O'Mahoney; he's a fantastic, fantastic actor.

In previous series there were several Murderers but now there is only one (Nathaniel). Does this singular focus affect Reid?

It's a brilliant dramatic device, to have two sides of the same coin with the Dove brothers; it's such a brilliant conceit. And that they're not unsympathetic: certainly Nathaniel, he's a psychopath really, but it's rooted in this terrible trauma from when they were little boys. As the story develops you see that he’s a traumatised and profoundly wounded boy who's being manipulated to a degree. It's not to say that he's not guilty but it's interesting and quite moving I think.

What does Jedidiah Shine's return and Mimi Morton's re-introduction mean to Reid?

The return of Jedidiah Shine is interesting because he already knows that Dove is up to his guts really in corruption and murder. Dove brings him in as an attack dog in a way. I think Reid finds it really chilling and frightening because Shine's a frightening man.

I think Reid is fairly distrustful of Mimi at the beginning but I think they're all certainly very grateful to her for looking after them. She has a real connection with Jackson and is probably still in love with him and you know their relationship ended badly in years previously.

Are Reid and Jackson more honest with each other now that there is a level playing field?

I think they've always been pretty robust in their relationship; pretty honest. That's the wonderfully attractive thing about Jackson, that even when he does hide secrets it's usually because of the ones he loves, so Reid's intelligent enough to understand that. There's a great fondness and understanding between the two of them I would say.

Over the five series, was there any particular low moments for Reid?

Oh god there's been too many to mention I think… if I think of highs, I think finding his daughter was a wonderful thing and finding sort of peace after he had been shot, but yeah, apart from that it's pretty bleak for Mr Reid, yeah.

How does the conclusion of Ripper Street feel for you as an actor who has been with the show since the start?

It's been lovely to tell the whole story, and have the chance to do that because Ripper Street's had a sort of quite a rocky ride. We did the second series and then it was cancelled and then it was revived and then we thought perhaps we would leave it at the end of series three and then we were asked to do more and actually it's sort of revealed itself into one wonderful big story, which was probably the aim at the beginning. It feels very much like we've come back to the beginning, certainly in episode six, which is the last. It's just a beautifully written episode; so it's felt extremely satisfying creatively to be able to do that.

Has Reid changed much over the course of five series. Would he recognise himself from Series 1?

That's part of the beauty of the last episode in that there is this circularity: I think perhaps the question is how much do we really change; how much do we learn… what makes us happy?

Will you miss playing Reid?

I will miss playing it but it feels as though I've played him now. Our lovely producer Will told me that we'll have done thirty-seven hours and that's enough I think. That's certainly the longest amount of time that I've played one character. But it hasn't felt like a chore: it’s been lovely; it's been a really special job; good people, talented people and lovely to work in Dublin.