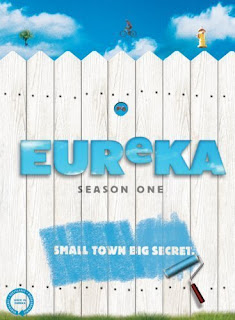 In a series of articles, Susan Omand and Steve Taylor-Bryant are going to remember the policemen, spies and criminal specialists that entertained them over the years. This time Susan heads for A Town Called Eureka....


Imagine if you will a large military science lab, Global Dynamics, hidden deep in the woods somewhere on the border of Oregon. Now build a town around it, populated and serviced by the real geniuses that have been recruited to work there and throw in a non-genius but highly practical Sheriff who must try and keep control of all the weird experiments and prototypes that these brainy types let loose and you have the basic premise of Eureka.

Over five seasons and 77 episodes in all, we get to know the lives of Sheriff Jack Carter (Colin Ferguson) and his daughter Zoe (Jordan Hinson) as they try to adjust to life, work and school in a town full of very intelligent, but often somewhat impractical science people, headed up by a core of main characters. Dr Allison Blake (Salli Richardson-Whitfield) is a Department of Defense agent who acts as the liaison between Eureka and the Federal Government, and later becomes the director of Global Dynamics on the death of her ex husband Nathan Stark (Ed Quinn) at the end of season 2. Henry Deacon (Joe Morton) is the town jack-of-all-trades who has ethical objections to the kind of research conducted at Global Dynamics, preferring employment as the town's mechanic. The main villain in the show was Dr Beverly Barlowe (Debra Farentino), the town psychiatrist. She secretly works for a mysterious organization known as the "Consortium", intent on exploiting Eureka's innovations by whatever means necessary.

Each episode in the earlier seasons had a stand-alone story, usually to do with the sheriff investigating some kind of accidental anomaly, due to the side effects of some experiment. Not being an intellectual, he usually came up with a completely out-of-the-box solution to fixing the problem that had not been considered by the scientists. But there was also a more serious, long story arc to every series involving Dr Barlowe, government conspiracy and industrial espionage, which built in the background as each series progressed, giving a sense of continuity.

This worked well for seasons 1 and 2, but the show ran the risk of becoming a "more of the same", especially with season 3 being badly affected and delayed by the writers' strike in 2008. So the start of season 4 needed a shake-up and, with no warning, five of the main characters travel in time back to 1947 and the inception of Eureka as the small military base from which the town grew. The first two episodes of that season totally rebuild the Eureka timeline as an alternate universe giving characters a fresh start and introducing a few new ones along the way.

The shake-up brought different main characters to the fore for the final two seasons. Sheriff Carter's Deputy, Josephina "Jo" Lupo (Erica Cerra), who had been growing as a character throughout season 3, gets a main role as head of security in the alternate timeline, Douglas Fargo (Neil Grayston), a fairly hapless junior scientist in the first few seasons, has suddenly been propelled to director of GD, with Alison Blake being Head of Medical Science now, and Zane Donovan (Niall Matter), genius bad-boy and on-off love interest for Lupo in season 3, becomes head of "Section 5", where the highly classified classified stuff goes on, in return for the change in timeline wiping out his relationship with the deputy.

Eureka was a good fun show with engaging characters and a lot of humour which meant that it never really took itself too seriously. I will admit that it "jumped the shark" a bit in season 4, with the whole time travel/alternate universe storyline but the writers managed to pull it back throughout season 5 to give a satisfying, if a bit saccharine, conclusion, even though this finale was earlier than intended with the show being cancelled at the end of season 5 instead of after the expected 6th season.

However in that time, Eureka managed to work in a crossover with another cult TV show, Warehouse 13, giving it a "shared universe" on the Syfy channel, and the stories of the characters have been back-filled in some small way in companion comics and novels.