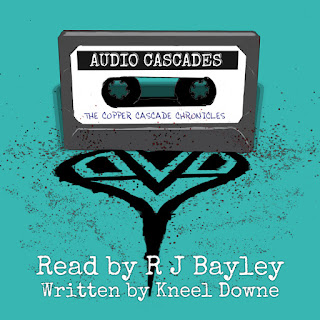 After reviewing The Copper Cascade chapbook a few months back, I was excited to learn that the story from the VirulentBlurb Universe was coming to us in the form of an audio drama with R.J. Bayley as the voice artist.

The Audio Cascades are performed in the vein of an old radio mystery from the Golden Age of Radio. The premise revolves around interviews of the inmates within the Copper Cascade (a prison for superheroes/villains) by Doctor Paul Nyman.

When you take the words from the warped and brilliant mind of Kneel Downe and combine them with the talents of an artist like R.J. Bayley you have the recipe for something intriguing and potentially special.

Sometimes, recipes don't come out quite as we had hoped.

In my estimation, the Audio Cascades fall flat. The elements that made Kneel Downe's chapbook so fantastic is his ability to create a darkness around the reader, and incite their sense of foreboding and intrigue, like a character in a slasher flick that knows they shouldn't open that door but they just can't help their self. That palpable anxiety is missing from the audio version. Not for nothing, but R.J. Bayley is a talented artist. It just seems to me that the vision in Kneel's mind is difficult to reproduce in any form without being, you know, as disturbed as he is. And I mean that as a compliment to both parties. The Audio Cascades are too light-hearted to capture the ambience of the Copper Cascades chapbook and the VirulentBlurb Universe as a whole.


It is not all bad, however. Bayley's talents as a voice artist and sound mixer are obvious, especially in the interview sections regarding the characters The Sharp Blade and Dark Deliverance. There are some interesting sound elements, well done, but that ultimately do not inflate the aura that surrounds the story in the way Kneel's words do when experienced in print form.

Speaking of print: I have to mention that I thoroughly love the Copper Cascade character poster artwork that Blurbinfo has been putting out on social media. The minimalist style and bold colours are striking. In particular, the Blood Punch and the Creeping Creeper posters are really beautiful.

The swing-and-miss of Audio Cascades is certainly not due to a lack of talent; rather, the two talents are just not the right meshing of skills. Sort of like if Kanye and Paul McCartney tried to collaborate on a song. Great in theory, but in this case, it just didn't quite work.