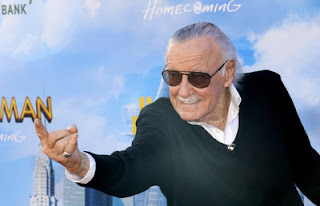 Hot on the heels of yesterday's news of a comics/audiobook team up for 2000AD's Pat Mills and Spokenworld, we hear that Stan Lee's POW! Entertainment has joined forces with project co-creators Luke Lieberman and Ryan Silbert to enter into an unprecedented, major deal with Audible.


Lee, Lieberman and Silbert are developing a new long-form novel, described as Mr. Robot set in a John Hughes world. This new universe will be first introduced to fans by way of a richly-produced audio experience, a format Lee has always been drawn to given its roots in the tradition of narrative storytelling.

Says Lee, "When Audible came to us with the idea of doing this as an audio project first, I thought it was inspired. The story is set within a culture of cutting-edge technology, so it deserves to be brought to audiences in a medium that truly captures the spirit of the universe, yet allows the listener to create their own, unique, mental picture of the story. What Audible is doing is truly groundbreaking, but it is also bringing us back to our roots."

"We are thrilled to bring the Stan Lee universe to life and to listeners in this unprecedented, written to the audio format endeavor with POW! Entertainment," says Audible Chief Content Officer Andy Gaies. "The immersive audio experience will excite and exhilarate all fans of Stan Lee's work."

Project co-creators Ryan Silbert, producer of the Academy Award winning film, God of Love, and Luke Lieberman, who oversees the Red Sonja franchise, note, "The 'what if?' questions surrounding emerging tools and know-how are the context of our story. We aim to blend this with an accessible human narrative to deliver the experience you expect from Stan Lee — where street level heroes uncover global conflicts much bigger than they ever imagined."

Production on the new project will begin shortly.