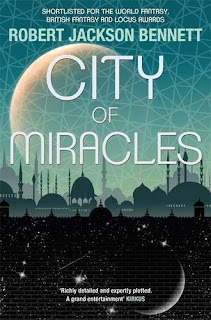 Our own miraculous pisky Romeo Kennedy heads into City of Miracles by Robert Jackson Bennett...

Oooh, those smashing, magical elves at Jo Fletcher Books don’t half provide us with some reading wonders, and Robert Jackson Bennett’s Divine Cities series has been just that.

City of Miracles will break your heart. It pulls all of the events that happened in City of Stairs, and City of Blades together and wraps them up with a pretty bough, and delivered to you by none other than Sigrud Je Harkvaldsson. Like a violent Father Christmas.

Here is the synopsis and as always be aware of mild spoilers.

Shara Komayd, once Prime Minister of Saypur, has been assassinated.

News travels fast and far, even to a remote logging town somewhere northwest of Bulikov, where the silent, shaven-headed Dreyling worker ‘Bjorn’ picks up the newspaper and walks out. He is shocked and grieved and furious; he’s been waiting thirteen years for Shara, his closest friend, to reach out to him - to tell him to come home. He’s always believed she was running a long operation, that there would be a role for him at the right time. Now he has no one else in his life, and nothing to live for - except to find the people who did this.

Sigrud wasn’t there for the death of his daughter Signe, and he wasn’t there when his old comrade Shara was murdered. Now Bjorn is dead and Sigrud is back. And he will find answers, for Shara, and for himself. He’s made a promise ...

The present tense third person narrative is just one of many things that I have really enjoyed in this series. It sounds a bit cliched but that style of narrative and the way that Bennett writes action scenes and his overall character interaction with the world, really pulls you into the mix of things.

As a reader, we like to be in the thick of it, and with this series you could almost have been in Sigrud’s pocket, like some sort of literary borrower.

The mix of espionage and fantasy has evolved from the start of the series. The time lapsed between books has added to growth of both political and divine events that happen in Saypur and the Continent.

Sigrud is the one non-changing factor, and as this book is primarily a focus on him, we see how the world has changed from City of Stairs and events like the Battle of Bulikov, and Sigrud is always trying to find his place, which of course before events was always by Shara’s side.

I personally love Sigrud for all of his facets, and there are many. Bennett has crafted Sigrud to be really stern and imposing (and then some) but there are times when there is incredible warmth and humour from the character.

But against all that he is terribly tortured. Both In the physical sense and the psychological.

Sigrud carries his pain that has amassed over years, and with everything changing around him and the tragic assassination of his best friend. There really is nothing more dangerous than a Dreyling who has nothing left to lose.

Like I said at the beginning, City of Miracles will break your heart.

It is a beautiful elegiac novel that perfectly encapsulates all that I have loved about this series from the beginning.

I finished the last chapter and cried. Because from my perspective this was the only way this story could have ended. And it is probably one of the most beautiful endings I have ever seen.

City of Miracles is out now via Jo Fletcher Books