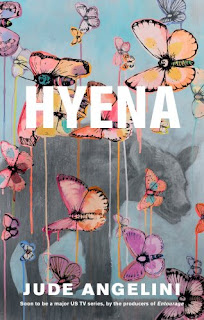 Barking mad or just a good laugh? Steve Taylor-Bryant finds a lot more as he reads Hyena by Jude Angelini...

There's something rewarding about being recommended a book to read. Your friend, colleague, brother in arms, understands you so well that the text he's just read instantly makes him think of you and the depth that tale may take you to, the effect on your psyche, he knows your moral compass so well that you know you are in safe hands with the title chosen for you. Then there's Nate McKenzie. He sees through all the bullshit, realises what your life used to be like before you grew up and cleaned up, and just wants you to be entertained by something that made him giggle. That book is Hyena by Jude Angelini.

Hyena is a collection of autobiographical stories by Jude Angelini, which takes the reader on his journey of heartbreak, depravity and hilarity, deftly moving between his adult life and his childhood growing up in a factory town outside of Detroit. Each story is told with brutal honesty, yet maintains a gallows humor that will leave you shaking your head in disbelief. Jude is one of the top hip-hop radio hosts on Sirius Satellite radio. His self-published, print-on-demand edition of "Hyena" has been an indie bestseller, despite having no ebook or physical distribution. Its exploration of drugs, sex, and the human condition compares to Charles Bukowski, Hunter S. Thompson, Artie Lange, and Jim Norton. It also captures the hardscrabble culture, language, and landscape of post-industrial Detroit, from which came some of pop culture's most compelling artists.

I'm not kidding you when I say that I don't really know anyone who would completely understand this book. I spent nearly twenty years as a bit of a headcase with massive addiction issues on top of my mental health problems and my inability to care enough about myself or others means that some of stories in Hyena are very close to anything biographical I might one day offer the world. I may not be a television celebrity, I may not play "guess the vegetable" with porn stars on my radio show, so I obviously can't compare myself to the actual man that Jude Angelini is but I completely and utterly understand him. I really got the emotional and the tragic that lay underneath the bravado comedy of accidental dwarf sex, the self destructive lifestyle that often left you wandering through life still able to function despite the chemical experiment riding through your brain. Hyena is not an easy or pleasant read for anyone. It is graphic in its sexual descriptions, it is all too real with its drugged debauchery for some to stomach and it is essentially quite cruel to most, if not all, in society. But it is funny, there are laugh out loud moments that leave the reader questioning their own sanity and ethical nature, it is humbling for those of us that lived a similar lifestyle, it's refreshing in its balls-to-the-wall power and unique language compared to other biographical releases.

It's not quite Hunter S. Thompson, as the synopsis borrowed from Goodreads above suggests, although I get the comparisons but, if you can keep your temper and your stomach long enough to get through it, it is a wonderful trip down some memories that I truly hope none of you ever have.