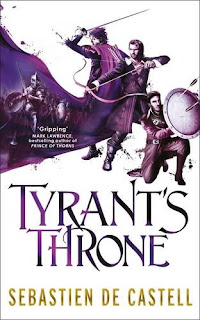 Romeo Kennedy takes to the Tyrant's Throne and reads the last of the Greatcoat novels by Sebastien De Castell...

Well, I feel bereft. After finishing the fourth and final book in the Greatcoat quartet, I cried. I read the first three books last year (reviews here) and instantly loved them. So when I found out via Twitter that Sebastien De Castell was doing a fourth and final instalment, I was over the moon as were many fans of the series. Tyrant's Throne brings the series to a stunning finale. It has everything the other books has but more. Brasti's jokes, Kest's strength and resolve, and Falcio always pulling them into near death situations with the slimmest of odds of getting out alive. Here is the synopsis ... (As normal, I will try and be careful with spoilers. but seriously, who would have guessed that Falcio was always two dogs in a coat all this time ... Seriously, if you haven't read Traitor's Blade, Knight's Shadow, Saint's Blood then read no further. And no Falcio is not two dogs in a coat ... He's three.)

Falcio val Mond, First Cantor of the Greatcoats, is on the brink of fulfilling his dead King’s dream: Aline is about to take the throne and restore the rule of law once and for all.

But for the Greatcoats, nothing is ever that simple. In neighbouring Avares, an enigmatic new warlord is uniting the barbarian armies, and even worse, he is rumoured to have a new ally: Falcio’s old nemesis Trin. With the armies of Avares at her back, she’ll be unstoppable.

Falcio, Kest and Brasti go racing north to stop her, but in those cold, treacherous climes they discover something altogether different, and far more dangerous: a new player has entered the game, and plans to take the throne of Tristia...

Tristia is on the verge of breaking into tiny pieces. Falcio, Brasti, & Kest, as usual, are doing all that they can to make sure Aline is the next Queen of Tristia. Of course, the Dukes have other plans and make the overall situation in Castle Aramor quite precarious. As with all of the previous books, Sebastien De Castell increases the stakes and decreases the odds for our magistrate trio to survive the most impossible situations with fight scenes which are technical but thrilling and do not hinder the pace of the action scenes.

There are many secrets revealed in Tyrant's Throne and without giving anything away, they are all pretty jaw dropping. Ever wonder how Kest Murrowson defeated St Caveil-Whose-Blade-Cuts-Water? Or how Falcio defeated Kest in a duel? Well wonder no more. Sebastien De Castell also gives the reader further insight into the mysterious orders throughout Tristia. We know by now that the Bardatti are a powerful order and their music tells the histories and legends across Tristia. But what do we know of the Honori? (Other than that they side with whichever Duke pays the most) but is there more to them than meets the eye, And what of the never before featured Rangieri? Who are they and more importantly, where are they? All this is answered in Tyrant's Throne. But it shows how vast and detailed Tristia is, which is also clear from the previous books but more so, I feel.

Of course no Greatcoat book would be complete without its villains, and any Greatcoat will know that Falcio, Kest, Brasti, and Valiana have faced off against some really unpleasant characters. None more so than Trin, daughter of Patriana, and Jillard the Duke of Rijou (whom Falcio has a very complicated relationship with ... On the account of Jillard trying to kill Falcio ... Numerous times) But Jillard is no match for the wickedness of Trin. Trin makes Jillard look like a puppy.

Trin has always been a shadow looming ovet Tristia. Even in Saint's Blood, when the trio face an entirely different kind of enemy, Trin is mentioned in passing but Sebastien De Castell has written her in such a way that you could almost expect her to jump out at any moment. Which makes her appearance in Tyrant's Throne very unsettling in the sense that you really don't know what horrors she has in store for Falcio. But Trin is not the only threat to Aline's throne or the First Cantor's life.

The threat in Avares is far greater and all of Tristia will be at the mercy of the battle hardened Northmen and women. Tyrant's Throne is exciting, it is the Greatcoat's last hurrah and encapsulates everything that made me love this series from the start. It will break your heart whilst savoring every moment.

Fans of the series will be familiar with the phrase, "The Greatcoats are coming" Well they came and conquered and then some As a final note, It is fantastic to see that this series of books has such a strong and vibrant fanbase online. And hopefully that will flourish even more.

Tyrant's Throne is out now via Jo Fletcher Books.