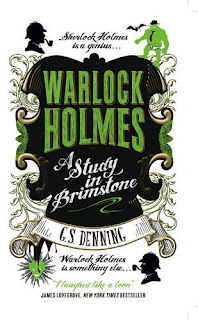 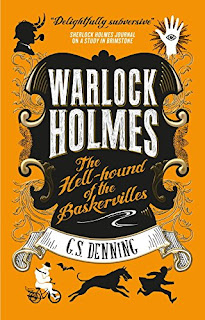 It's a two-for-one (you lucky people) with our pisky taking on a warlock as Romeo Kennedy reads Warlock Holmes, A Study In Brimstone and The Hell-Hound of The Baskervilles by G. S. Denning...

But it is a tried and tested formula that works when done well.

Now, I’m always a little uneasy when reading any kind of comedic SFF. Not because I’m a humourless, grumpy Cornishman, but because humour is so subjective. Now that is not to say that I’m the great knowledge of all humour, but like with most people I know what type of humour I like and what I don’t. If that makes sense.

The Warlock Holmes books, bring the now re-imagined awful detective and humour together with enjoyable results.

I wasn’t splitting my sides with laughter, but they are really fun books.

Sherlock Holmes is an unparalleled genius who uses the gift of deduction and reason to solve the most vexing of crimes.

Warlock Holmes, however, is not. He may be a font of arcane power, but frankly he couldn’t deduce his way out of a paper bag. The only things he’s got going for him are the might of a thousand demons, the spirit of Moriarty trapped in his head, and his stalwart companion Dr. John Watson, who is always there to guide him through the treacherous shoals of Victorian propriety ... And save him from a gruesome death every now and again.

I read both of these books In the space of a couple of days (which for me is highly unusual) and I think it was because they were fun books.

G. S. Denning not only swaps the roles of Watson and Holmes, but makes Holmes very dangerous to be around. Also, fans of the original work by Sir Arthur Conan Doyle, who you have probably heard of (Deducing, I do it for breakfast) will notice that there are some magnificent illustrations throughout both books in the same style as those featured with the original Holmes stories in the Strand magazine. I failed to see who these particular illustrations, but they are a wonderful feature.

A Study In Brimstone is split into six stories and each one brings Victorian London and the supernatural together and Watson has a lot of work on his hands, whilst Holmes whimsical attitude to the dark arts and quite funny outburst, as well a penchant for toast and soup make the work ahead and the game afoot that much more difficult.


Written in the same diary style narrative as the original Holmes stories. A Study In Brimstone is definitely a worthy addition to your bookshelf for, if nothing else, you get to read the Baker Street Elite who are all talking mutant rats. You would never get that in a Conan Doyle book.


The Hell-Hound of the Baskervilles

The Hell-Hound of the Baskervilles is a more different demon than A Study in Brimstone, the same humour is there, Holmes is probably more dangerous than he was in the first book as well as more incompetent, but it shines a light more on the Holmes and how he became the way he his.

Here is the synopsis ... (spoilers ahead)

The games afoot once more as the long-suffering Dr. John Watson and a bedridden and somewhat pungent Warlock Holmes (though he’s getting better) face off against Moriarty’s gang, the Pinkertons, flesh-eating horses, a parliament of imps, boredom, Surrey, a succubus, an overly Canadian artistocrat, a tricycle fight to the death and the dreaded Pumpcrow. Oh and a hell-hound, one assumes.

To be honest it was this synopsis that made me want to give these books a go.
It had me at “parliament of imps” so to speak.

Moriarty was of course a fairly important part of A Study in Brimstone, but much more towards to the end. And of course Holmes wakes up dead in the beginning of this book after an attempt of driving Moriarty out of his head. Poor Watson has to lie to Mrs Hudson as well as cover up the rather unpleasant odour.

Lestrade and Grogsson feature much less frequently in these string of stories, and to be honest even when they did feature they felt a little jarring. Having said that, Groggsson, Watson, and Holmes in a tricycle/unicycle battle was very enjoyable indeed.

But as fun as I found the stories in A Study of Brimstone, in this book, there were some stories that just didn’t work for me despite having some elements that I enjoyed, i.e The Adventure of The Blackened Beryls, and The Reigateway to Another World.

Silver Blaze: Murder Horse, and that one about the hell-hound roaming around Dartmoor, were my favourites of this book.

The latter was a very enjoyable twist on the Hound of The Baskervilles. Now I don’t know how many times this story has been retold, or even if it has been retold in this particular style but I can say with some conviction, that it was a very good one with added details of Holmes demonic genesis and affiliation with the dark arts.

To take what is probably Conan Doyle’s most famous Holmes story and, as cliched as it is to say, but to make it anew and an almost original piece of work was quite a feat. And one that I felt was achieved.

And there we have it. A duo of fun novels that one can quite easily spend a weekend enjoying the adventures of our troublesome, supernatural detectives

Both books are out now via Titan Books.