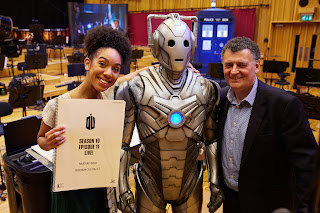 Steve Taylor-Bryant looks at the era of Steven Moffat as Doctor Who Head Honcho and, whilst he admits there are some things that he didn’t like, he looks at some highlights of Moffat’s tenure…

For a long time I was quite the Moffat apologist. Whilst the Doctor Who community was foaming at the mouth quite a lot over the years I spent time trying to explain to people that I knew what he was trying to do and that maybe the ideas weren’t executed well, and that pretty much sums up the Steven Moffat era. Whilst some of his stories massively recycled what had come before, right down to the series ten finale episodes where yet another travelling companion ended up as a cyberman, there was some originality in a lot of what he attempted. Some of his casting choices were questioned, a lot of people just didn’t like Clara, some of his casting choices were excellent, Pearl Mackie as Bill Potts was a breath of fresh air. And it's also worth remembering that whilst Steven Moffat maybe didn’t have a consistent tenure as showrunner he is still quite a phenomenal writer. I started the excitement for his era off the back of my love of Coupling, Chalk, Press Gang and Jekyll. I thought his episodes of Doctor Who for his predecessor, Russell T. Davis, The Empty Child and Blink were some of the best episodes of Doctor Who for many decades. But, whilst I went in excited, I have left jaded and, if I’m honest, a bit bored.

I’m not like the rest of you, I never fully bought in to Peter Capaldi as The Doctor. That’s the beauty of Doctor Who though isn’t it? We each like something different. You all loved Capaldi because of his speeches, his rants, his message of hope and freedom. I just got more shouting. The speeches and rants worked for Matt Smith incredibly well because most of the time he was sweet, funny, quirky, almost innocent and full of glee at discovery. Capaldi was, or at least to me, shouty and dour a lot of the time, not quite angry but definitely irritated an awful lot, so these big powerful speeches that apparently define his tenure and make everyone swoon at his feet, to me are just a shouty man shouting a bit louder. However, whilst Capaldi is not my favourite Doctor by any stretch of the imagination, he is now my youngest child's Doctor, the baton between father and son has been passed. He has also made me appreciate Matt Smith a lot more than I did before, and I loved Matt Smith. And, in acknowledging my lack of enthusiasm for Capaldi, I'll be honest enough to say it's really not his fault at all. He shouldn’t have started his run on the show with Clara as his sidekick. Whatever your thoughts are on Clara, Moffat’s obsession with the Impossible Girl should have ended with Matt Smith’s demise. If Capaldi had maybe had Pearl Mackie from the off then perhaps my thoughts on his incarnation may be more favourable because their chemistry during series ten has been the highlight of the year and, for that, the Executive Producer has to be responsible. So there we have it. Proof that I can indeed hate on Steven Moffat like the rest of society. Now to my favourite bit…

Here’s a few of things I am thankful to Steven Moffat for, a list of people, episodes, characters or traits that I will genuinely miss now The Moff is handing over the keys to the TARDIS to my mortal enemy Chris ‘Dinosaurs on a feckin Spaceship are you all insane?’ Chibnall… 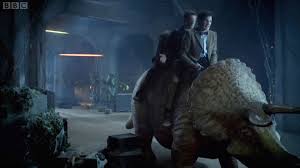 Managing to get one of my favourite directors onto the show as many times as he did was a real coup in my eyes. Talalay is a gifted director, responsible for Tank Girl amongst other things, like at least one episode of every show you can think of, and her direction especially on Heaven Sent, Dark Water and the series ten finale World Enough and Time/The Doctor Falls breathed fresh air into British television. Possibly one of the best television directors in the world graced one of the worlds most followed shows and Moffat made that possible. Be thankful.

It's all well and good bringing back foes from the Classic era of Doctor Who, kids are finding out Daleks for the first time and that’s awesome, but you have to have some originality as well, if nothing else you have to try and scare a 41 year old fan who knows about the older monsters. Blink was possibly one of the greatest episodes of Doctor Who ever, certainly of Nu Who (do we kids still call it that? Groovy!) and the introduction of statues that could move as soon as you take your eyes off them is a freaky idea that petrified my children, led to nightmares for a while, and means I can't walk past a church or statue without getting goosebumps so I think it's safe to say Well Done! Well Done indeed. In a slightly more cinematic episode and storyline we had another monster that something happened when you weren’t looking; you forgot them. The Silence were frightening, the effects of The Silence when they killed people were astonishing and you got to see first hand the difference between Nu Who and Classic budgets. Proper ‘hide behind the sofa monsters’.

Ah, the two Neils. My love of Neil Cross, Luther creator and all round writing genius, is well known and, whilst he only wrote The Rings of Akhaten and Hide, both very different stories, he did enough to make me think that once he was done with Luther he could turn his hand to more science fiction and possibly even take the showrunner role from Steven Moffat. If only dreaming made it so. The ‘other’ Neil is well known to a lot of you for his writing but I was worried that his distinctive style wouldn’t fit right with a 40 odd minute slice of television. Whilst Nightmare in Silver is hardly a classic who can forget The Doctor’s Wife? That Burton-esque slice of TV was by far one of the most fun episodes of Moffat’s era and Smith excelled in his madness alongside Suranne Jones as Idris/The TARDIS. Whilst the idea of Chris Chibnall is not an appealing one for me, and the rumours of an American style writers room make me giggle, I hope he finds time and money to bring back the two Neils.

It's All A Bit Timey Wimey

I hated the 50th Anniversary. I’m on record with my hatred of the 50th, a police record as it happens as my views ignited some of the darker elements of Doctor Who fandom to make threats against me and my children. But – whilst I hated the story it was necessary, it had to hit a big red reboot button, it had to be written by a man with thicker skin than mine and that’s because ‘canon’ (goodness me how I hate that bloody word) had to be reset, wiped out even, for the show to be able to continue. Without a huge reboot we wouldn’t have anymore Doctor Who, fact. Whilst I hated the story, War Doctor aside, Moffat’s ability to explain things in an unexplainable timey wimey way was exactly what was needed. Only a brave writer would have even considered rebooting 50 years of history and I have nothing but admiration for Moffat even taking on the challenge let alone doing it in a way that many of you loved. 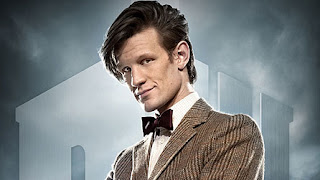 Hardly anyone knew who Matt Smith was before he was cast as The Doctor and many people didn’t want anyone that young. Whilst Eccleston hadn’t had long enough, and Tennant overstayed his welcome, Doctor Who was going to continue. New showrunner, new cast, new set of stories, excitement poured from every orifice! Smith came in and was new and fresh. He played the world weary, guilt laden Doctor better than anyone but only when he had to, instead spending most of his era almost giggling with the innocence of youth, marvelling at discoveries despite the fact he had spent thousands of years discovering stuff, getting friendships and relationships wrong and yet so right in the way a child would at school. Matt Smith didn’t bring any baggage, he didn’t try to copy or pay tribute to previous incarnations in the way Capaldi tried to pay tribute to all of them, he just brought a youthful exuberance to an ageing entity and gave me some of my favourite ever Doctor Who moments. After the world had gone crazy for David Tennant (honestly, what the hell is wrong with you all?) the next casting choice was vitally important, more so than the one that we have now I think, and new showrunner and main lead knocked it out of the park. Like all actors in the role Smith wasn’t always backed up by great writers but, unlike other actors in the role managed, in my opinion, to more with what he was given. He is MY Doctor of the modern era and right up there in my all time list. He was funny, he was intelligent, he was playful yet dangerous, and he gave better speeches than any of the other actors in the role so far. From Stonehenge to a sun parasite in Rings, Smith nailed his lines every single time and is by far my highlight of the Moffat era.