Doctor Who - Spearhead From Space 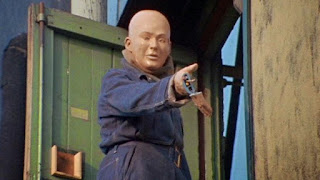 Our Doctor Who expert, Tony Cross, is journeying through all of time and space to bring us his thoughts on every available Doctor story. Today is the Third Doctor adventure Spearhead From Space...

It has been a long time. Let us forget this long gap and carry on as if nothing has happened.

Spearhead From Space arrives like a brightly coloured meteor after all the black and white Hartnell and Troughton. There's a glorious new title sequence although, I suspect the majority of people watching this saw it in black and white. I had a black and white portable television well into the 1980s. I digress.

I'm going to suggest that Spearhead From Space is the best story to introduce a new Doctor - ignoring An Unearthly Child for sake of argument - until The Eleventh Hour. So good is it that RTD basically homages it to death in Rose, which is surely Spearhead From Space but without UNIT and with a shift in companion to the more 'ordinary' Rose Tyler.

Indeed, it is UNIT not the companion that introduces us to the new Doctor. That's because they are also busy interviewing the new companion, Liz Shaw (Caroline John.) Liz Shaw is a proper scientist with multiple degrees, a fine line in dry wit and a dash of cynicism. She's being interviewed by the Brigadier for the role he really wants the Doctor to fill.

Meanwhile, mysterious things are falling from space, yokels are trying to be devious at risk to their own life and limb and all is not well at a plastics factory.

Our introduction to the new Doctor is slow by modern standards. We don't really get a clear idea of what he's like until the second episode. Indeed, the Brigadier - who knows nothing about regeneration - isn't even convinced it is the Doctor initially but the Doctor's escape from the hospital and blasé arrival at UNIT headquarters help convince him otherwise.

We start to find out more about what's going on. Ransome (Derek Smee) escapes from the plastics factory run by Hibbert (the ever-wonderful John Woodnutt) and his mysterious new colleague: the sinister Channing (Hugh Burden). Those three put in marvellous performances. Smee doesn't last long but gives us one of the few genuinely realistic depictions of terror in the series history. Woodnutt, who will serve Doctor Who well over the years, is great as Hibbert. But I think the star of the show is Burden who gives a chillingly alien performance.

It turns out that the meteorites contain the energy required by the Nestene Consciousness to build themselves an ideal body with which to rule the Earth and use plastic to take over the world. The Autons are just a place to put that energy. They come in basic models - the shop window dummy - through to the increasingly sophisticated replicas and are rather brilliant in both forms, although we only really see one proper replica in action, which is General Scobie (Hamilton Dyce).

The Nestene's plan is quite clever too: sow fear in the streets via shop window dummies whilst the replicas of the important civil servants and military officials do their worst behind the scenes. The latter we don't really get to see - except General Scobie - but the Target novelisation really brings this to life. (PS Read the novelisation btw it is fabulous.)

The Doctor and Liz have put together something which might defeat the Autons, they go out and after testing it on General Scobie go on to take on the monster itself. Obviously, there are some issues with it in order to stretch out the tension. However, all comes good in the end. The Doctor kills the weird tentacled beast in the tank illustrating a) it is hard for Doctor Who to do good tentacle and b) some superb Pertwee gurning.

This is tightly plotted and rattles along at an almost modern pace, although we get more time to establish characters, such as Liz Shaw and the Doctor himself. Caroline John does a fine job of her first story. Staying with Pertwee and Courtney as they begin a wonderful partnership takes some doing and she never seems to be lost.

What of the new Doctor? Well, he seizes the part with both hands. He has the charisma to burn and his Doctor gives us a chance to see a bit of comedy, a bit of seriousness and a lot of energy pretty rapidly. This is a different Doctor to Patrick Troughton. He's less aimless. He's angry at being dumped on the Earth by the Time Lords and a little bit devious. He tries to trick Liz into giving him the TARDIS key so he can escape - but the Time Lords have foreseen that and blocked him there. To cut a long story short he's brilliant from the off and it makes you look forward to seeing more of this new Doctor.

However, this is the last four parter for the rest of Season 7. The next three stories are all 7 parts long, which feels like a serious chunk of Doctor Who even for me. And I've seen them before.

So, next up Doctor Who and the Silurians.