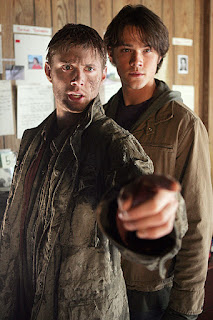 Steve Taylor-Bryant delves into the unknown as he breaks down twelve seasons of Supernatural into 12 Top 5 articles. Before he starts, here is what started his binge watch - his thoughts on the pilot episode from season one...

Whilst Devil's Trap, the season finale, is probably better television, and introduces Bobby Singer who I adore, by the time you get to the end of the season you pretty much know what's going on and have an idea of the characters and how they interplay and react. For a show to get strong enough for an episode like Devil's Trap to work though it has to built on strong foundations and, since I'm a decade behind everyone with their love of the show, I felt it was important to start my journey where the Winchester brothers started theirs.

A suburban home in Kansas and a mother puts her children to bed. Later in the night she hears a noise from the room of her youngest and when she enters she sees a figure standing over the crib. Initially the mother, Mary (Samantha Smith), thinks it's her husband John Winchester (Jeffrey Dean Morgan) but he's asleep downstairs when he hears Mary scream. He runs to the room to see Mary pinned to the curling with a horrific wound in her stomach. Mary spontaneously catches fire and John shouts for his eldest son, Dean, to take baby Sam outside and wait for him whilst he tries to save his beloved. The opening scene ends with John and his boys sat on their car, a black Impala, whilst firemen try to extinguish the house. Twenty two years later Sam Winchester (Jared Padaleki) is celebrating a great score in his college tests and is excited about his interview with a law school after the weekend. After the celebrations are over Sam and his girlfriend, Jess (Adrianne Paliki), are asleep when someone breaks into their house. After wrestling with the intruder Sam realises it's his brother, Dean (Jensen Ackles), who he hasn't seen for a number of years. Dean explained their father has gone missing on a hunting trip and convinces Sam to help him search, promising to have him back in time for Monday's interview. Sam agrees and Jess, whilst a little worried, doesn't mind as she's not aware of the kind of Hunter the boys father is.

The journey takes the Winchester's to Jericho where their dad had been investigating disappearances over a decade on the same stretch of road. After talking to the girlfriend of the latest victim the boys think they are dealing with the urban legend of the ghost of Constance Welch who had jumped from a bridge after killing her children. Despite Sam's reluctance when it comes to hunting the boys visit the bridge and see the ghost for themselves when the Impala mysteriously starts itself and tries to run them down. The boys check into a motel and realise their missing father has a room there and go to see if he's returned. They see all his notes and his investigation materials but no dad. The local police have been staking out the motel and arrest Dean. The local sheriff shows Dean a note from his dad, Dean 35-111, and ponders its meaning. Meanwhile knowing they are dealing with a Woman in White Sam tracks down the Welch widower who tells Sam he had been unfaithful to his wife thinking that is why she did what she did and that Constance is buried in a plot at the house where she killed the children. Dean goes full Macgyver and escapes custody with a paper clip and goes to meet Sam who is being seduce by the Woman in White. Sam holds off her advances and refuses to take the ghost to her old house so she takes control of the Impala and drives them both there herself. Dean arrives and distracts Constance by shooting at her while Sam rams the car into the house, allowing the spirit of Constance to be reunited with her children and they disappear. Dean has worked out that the note from his dad is coordinates to a place in Colorado but Sam doesn't want to be a hunter and Dean takes him back to college. Sam goes home to find Jess in the shower and falls asleep on the bed. He wakes when he feels blood dripping on his face and sees Jess pinned to the ceiling just like his mother was and she bursts into flames. Dean rescues Sam from the house and knowing his life will never be same, Sam joins Dean in hunting and searching for their father. 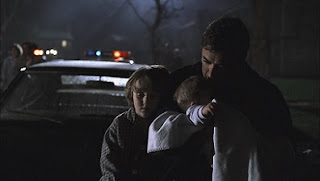 Why did I wait so long to watch Supernatural? What a great debut episode. Urban myths, violence, humour, a great story, a beautiful car, nods to pop culture, and fantastic songs! I can see why some critics draw a parallel with The X-Files but I think that's an unfair comparison. The writing, whilst really good, is not as classy as The X-Files and from what I can see the target audience is completely different. I loved the use of urban myths and it allowed me to watch a ghost story without having to feel fear like you'd get from a horror film which gave a level of enjoyment I didn't think I'd get. The cast are all solid performers and whilst I'm familiar with Jeffrey Dean Morgan's work I'd not seen Jared or Jensen in anything before and I remember when I first saw this episode deciding that of the two brothers I prefer Jensen's Dean but that Jared's Sam would offer something different to the relationship. He's not as gung ho as Dean, he's a lot smarter and investigative due to his educational background and he'll certainly keep Dean busy with facts and perhaps a moral angle to his crusade but Dean is funny, Dean is full of rage, Dean is a smart mouth, and of the two brothers I think I'd rather have a beer with Dean which is important because if you're going to commit to two hundred hours of television, watching the same characters, you need some kind of personal connection to one. You need to understand them, you need to like them maybe, or in this case you need to feel comfortable in their company otherwise how else can you root for them?

As far as pilots go the introduction to Supernatural is great. It gives a way in to what is obviously going to be a longer story arc, it gives enough character background for you to pick sides but without saturating you in every detail so you know you can discover more. It works as both a standalone story and a springboard for a longer narrative which is hard to do but I appreciated it. It left me wanting more and as my viewing was going to be of a binge nature (I ended up averaging 5 episodes a day) it's important to want to get straight into the next one. Plus that car! Oh my word that car is gorgeous. I want one!