Steve Taylor-Bryant delves into the unknown as he breaks down twelve seasons of Supernatural into 12 Top 5 articles.  His top 5 from season four...


Pretty sure this is my favourite season. Okay, well it’s my favourite season so far, I won’t know if it’s truly my favourite for another few years I guess. Anyway, there is so much goodness contained within the episodes that it is very difficult to narrow down just five, I mean even positions 4 and 3 are tied together due to the two part greatness of them, and the characters introduced this season pretty much all have a huge part to play in the entire future of the show. Castiel is the obvious one, the character I think I love the most, well at least today I do, and it’s strange watching his introduction and early episodes again after watching him in the later seasons. The way Misha Collins plays Castiel as well is quite brilliant in its simplicity, the ultimate straight man if you will. Then we get to Chuck in my favourite episode of this season, The Monster at the End of This Book. Watching back now, now I know the huge twist that will come in Season 11, it’s all right there. Clues, Easter eggs, but just as Chuck takes the centre stage in season 11 and becomes vital, here he is just really funny and introduced in a way that really pleased me. Anyway, enough hinting at spoilers… 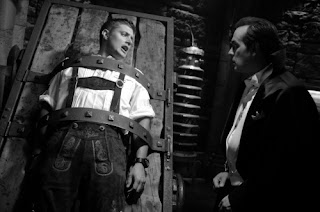 “Well, look at me. I mean, I came back from the furnace without any of my old scars, right? No bullet wounds, knife cuts, none of the off-angle fingers from all of the breaks - I mean, my hide is as smooth as a baby's bottom. Which leads me to conclude, sadly, that my virginity is intact.”

It's Halloween time and the Winchesters face-off against a shapeshifter with a penchant for impersonating classic movie monsters like Dracula, the Wolfman, and the Mummy. 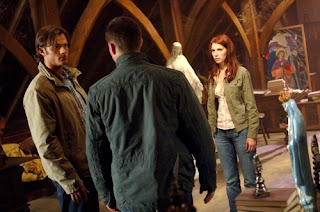 “So they lock you up with a case of the crazies, when really you were just tuning into Angel Radio?"

Sam, Dean, and Ruby discover the existence of a female prophet named Anna Milton, who can hear the voices of angels and thus figures into the plans of a demon named Alastair who wants to use her as a tool against the angels. 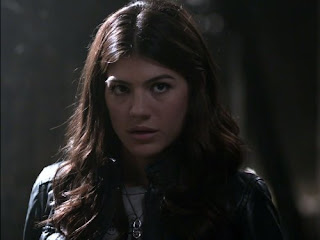 “God, I hope so. Otherwise, he's at Hedonism in a banana hammock and a trucker cap.”

Dean and Sam figure out why Castiel and his superior/handler, Uriel the Angel of Death, want Anna Milton dead when the three of them are forced to go on the run, not only from heavenly and vengeful angels, but from Alastair and his demon minions who also try to track down Sam, Dean, and Anna. With the assistance from the now-blind soothsayer, Pamela Barnes, they discover that 'Anna' is a fallen (former) angel and needs to seek her grace wings before the forces of both Heaven and Hell find them. 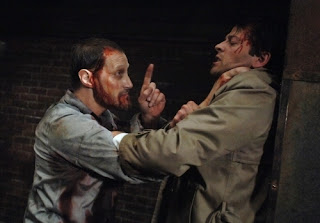 “Pamela. You know, psychic Pamela? You remember her. Cas, you remember her. You- you burned her eyes out. Remember that? Good times! Yeah, then she died saving one of your precious seals. So, maybe you can stop pushing us around like pieces on a chess board for FIVE *FREAKIN'* MINUTES!”

Uriel and Castiel forcibly recruit Dean to torture the captive Alastair. They need to find how, who or what is killing angels as one of another 66 Seals in which both Dean and his former captor play mind games against each other to break one another down. Sam is forced to call upon Ruby to help him find Dean before he emotionally cracks, while the rouge angel, Anna Milton, also returns to ask Castiel where he stands on his position as an angel of the Lord - does he obey all heavenly rules without question? 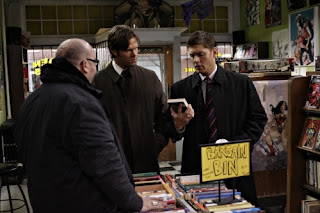 “It was too preposterous, not to mention arrogant. Writing yourself into the story is one thing but as a prophet? That's like M Night level doucheness.”

Sam and Dean investigate a reclusive young author, named Chuck Shurley, who has written a series of books and graphic novels about their adventures since starting out back in 2005, and try to find an explanation why he knows so much about their lives, while trying to find out what lies in store for them when he has a vision about a meeting with the evil Lilith.