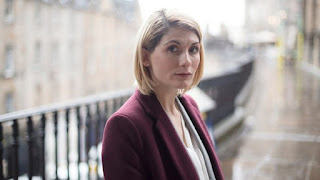 Read an interview with Jodie Whittaker who, ironically, plays a Doctor in the new psychological thriller Trust Me, penned by Dan Sefton and premiering this August on BBC One...

Cath Hardacre is a good nurse. Caring and hard-working, she does her best for everyone in the cardiology ward she works on. However, when she raises her concerns about the standards slipping at the hospital her world takes a turn for the worse.

After being sacked for whistle-blowing, Cath turns to her best friend Dr. Ally Sutton, who is leaving her life as an A&E doctor and emigrating to New Zealand with her new husband. At a drunken party Cath finds Ally’s discarded paperwork and makes the desperate decision to take a second chance at life - by stealing her best friend’s identity.

Cath, now calling herself Ally, accepts a job at a failing emergency department in Edinburgh and embarks upon a new life with her young daughter Molly. However, with her good-for-nothing ex-partner Karl trying to spend time with them and a journalist chasing her about the issues at her former hospital, how will Ally cope with leading a double life?

What appealed to you about this project?


I was sent the script for the first episode and it fascinated me because it went in a completely different direction to how I thought it was going to. Particularly at the beginning when she’s suspended for whistleblowing and loses her job. It could have gone so many ways, and the fact that she takes on this new identity isn’t the way that I thought it would go. I love the fact that her choices are quite morally dubious - they certainly aren’t black and white. She makes decisions that are quite challenging to justify, even though we know her reasons. I’ve never acted in anything medical before, so it felt completely new.

How does Cath’s lie come about?

Cath starts off by having a conversation with her best friend, Ally, who is a middle grade doctor in A&E and is giving it all up to emigrate to New Zealand. Ally is packing up the life that Cath would have loved to have had, leaving it all behind to go and do something completely different. Suddenly there is an opportunity for her to take on the identity of her friend and in that panic, not necessarily the clearest thinking moment in her life, she does it. Once you set off on a path of lies it’s very difficult to undo it without bringing everything crashing down.

Did you receive any training on medical procedures?

Yes! The writer, Dan, who is also medical consultant and a doctor outside of TV production, showed us a load of stuff that he used when he was training people. He brought in the CPR dummy and showed us how to do a cannula and he, very bravely, let me put a cannula in his vein. I did it right, thank God! Also, YouTube is amazing. The genius of the internet is that you can basically sit at home and Google medical procedures, and TV shows such as 24 hours in A&E, which I watched hours of. 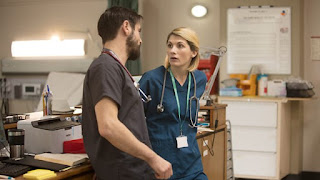 How else did you prepare for the role?

With regards to the technical stuff, we had an on-set consultant so that there was always someone to help when we had to do the procedures. The best thing for me was that my character was also out of her depth and didn’t always know what she was doing, so it kind of covered my own personal fumbles. I’m not someone who likes to over prepare for dialogue scenes, because I think that makes me not listen to what the other person is saying as I’ve already decided how I’m going to do it. It immediately makes it interesting and new and you can’t plan for that, which is great. You can’t ‘wing’ the medical stuff so I had to do my research for that. One of my friends is a Sister in A&E and I sent her a lot of messages asking ‘how do you pronounce this?’ and ‘what does that mean?’, so basically she was my personal medical coach even though she works full time!

Is it challenging playing someone who leads a double life?

Yes, but no more challenging that playing someone who has had something happen to them that I haven’t personally experienced. What’s hard is trying to gauge how good a liar she is, or how in a panic she is. You’ve got to be careful, because you can’t make the other actors seem stupid. These are intelligent, fully formed characters that you’re working with, so it was a fine line of being able to deceive and it not being something that comes easily to her. However, it can’t be that it makes everyone around her feel a bit like an idiot for not working it out. That was tricky, but the director is there to help guide you through it.

Did the uniform help to get you into character?

Yes. It feels odd when you put it on. I did five weeks of studio filming, back to back - all the medical stuff was contained so everything started to become a bit like second nature. The first few times I had to put on an apron, the ‘take’ ended up being about 15 minutes long. Then I worked out that you shouldn’t put the gloves on before the apron! There was lots of daft stuff like that, but you then get into a rhythm. It’s good because it makes you immediately feel like you look the part and then all I had to do was make sure that I knew the lines!

What were some of the challenges that you faced during filming?

I’m not very good with learning dialogue when there are lots of medical terms! I enjoy the adrenaline of being on set because I’m quite good at choreography, I respond well to being taught something physically. That’s why I was terrible at school, because they talk you through things rather than physically show you. I enjoyed doing the different types of surgery as it was fascinating, it’s nerve-wracking but you realise that you can do it. Also, the team who created the props put in so much hard work to make sure we didn’t mess up our bits. I struggled with having massive speeches that involved these medical words. I don’t have a brain for that!

Did you enjoy working in Scotland?

I absolutely loved Glasgow! The crew were phenomenal and the city is wonderful. I could move my family up there and we had a great time as there were loads of brilliant restaurants and everyone was lovely. It was brilliant and I would snap up another job there very quickly, although it does get very dark and cold over winter!