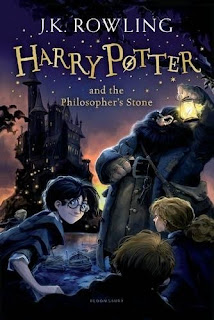 A very strange thing happened when we arrived at the office this morning and discovered a pisky-dusted envelope had been slid under the door. It was addressed to our editor but marked for the attention of the author J K Rowling. For a bit of Friday fun, here's the letter we found inside, presented to you (and Ms Rowling) just as we received it...

Dydh da, and the highest of greetings to you from all of us here of the Fourth and Third tribe of the Piskies of Cornwall.

As Lord of the Barrow, I wish to extend my deepest thanks for writing the memoirs of the wizard known as a one Harry Potter.

What a fabulous set of non-fiction books. Here in the barrow we have a humble collection of books in the barrow’s library including the entire set of Fara The Bard’s essential telling of ‘The Fish Who Thought He Had,’ and Marsh Beardscratch, who, as I’m sure you know, wrote many tales chronicling the deeds of the great pisky hero Jowan the Bow, and we also have my personal favourite ‘The Tale of Myghal and The Sword Who Ran’ by Rascal Bluewing, which I’m sure you yourself have read on more than one occasion.

We also have other reading materials of which no mortal can ever lay their eyes upon, to do so would mean great peril. However, it has to be said that this is a rare occurrence, to this day some piskies in our tribe shudder at the mention of the mortal we shall refer to as Bob the Long, who once took it upon himself to cast his eyes upon the works of the Midnight Wanderer and to this day has sudden bouts of transmogrifying into a bowl of fruit and neighing like horse simultaneously. But of course your chronicles of the Boy Who Lived take pride of place in our library, and many discussions and raucous debates have taken place in our great hall as to where the Sorting Hat would place us (Dugworth, The Master of Coats, reckons he would like to be in Gryffindor but Pandrik Polglase said that Godric Gryffindor himself once sat on Dugworth’s hat, many moons ago and he’s still very cross with him about it.) and with each discussion we hear about how old Tremayne Trencrom once had a job interview at Hogwarts, and says how he even met Dumbledore himself, although ol’ Trencrom was unsuccessful at the interview and ended up becoming a master craftsman. We have heard his story many times in our discussions, and each time he starts with, “Have I told you about the time...” we all know what story is coming next. And to this day when we ask him why he didn’t get the job, he pretends to sleep or decides that there is cleaning to be done, and I can assure you, Trencrom jumps feet at the sight of a speck of dust.

I would like to apologize for the delay in writing this letter to you. We all decided that we would wait for everyone at the barrow to read the chronicles of the Boy Who Lived before delivering our collected verdict. There are over a thousand of us in this tribe and, so as you can imagine it took quite a while, and took even longer thanks to Balgryn Perran, who took it upon himself to read the chronicles of Harry Potter backwards from the very last page of The Deathly Hallows, and became quite excited when certain characters were resurrected.

After explaining to him that he was doing it wrong he started again, this time he read them in the right order ... But upside down and swore blind that we were playing a trick on him. Well, anyway, he ended up reading them in any-which way you can think of, and ended up causing himself an injury. Silly Balgryn, he should never have literally consumed the text to get a better understanding of it.

So, it gives me the greatest pleasure to inform you that we have all finished your chronicles of the Boy wizard and, how much we all thoroughly enjoyed it.

We were at times concerned, not about your retelling of the tale, oh no, but how seven books would survive being read by a thousand people, and including the incident with Balgryn ... Well, let me just say that it took a considerable amount of our own pisky magic to ensure the books’ survival after being considerably chewed and partially digested. We were, however, successful in this endeavor.

I’d like to tell you about when myself and the others reached The Chamber of Secrets (not literally, we’ve no idea where it is, not even Brenn the Catcher and she knows where everything is) there was much pride when we reached the part about a one Professor Gilderoy Lockhart and the Cornish Pixies.

But there was alarm also. I had read it first (as I am Lord after all) and prepared the others to avoid mass panic. We were concerned that our true identity would be revealed and everyone would want a pisky. And we all know a pisky is for life not just for that holiday with the large bearded human. Or is that puppies? I can never remember.

Anyway, the pixies in the chronicles of the Harry Potter books were done fabulously (the electric blue was a very nice touch indeed, at our famous Kalan Gwav ceremonies some of us attend the party dressed in blue as a tribute although Lem Rowen went one further and covered himself and the cat in blue paint. If you look closely you can still see the blue footprints on the ceiling in the great hall. How he even managed that with a cross cat clinging to him, we shall never know) We all agree that you took the highest courtesy to hide our true identities with utmost discretion.

There was much relief amongst the tribe, although you did manage to keep some truths in there. Yes, we are incredibly tricksy and mischievous and when a group of us are together we do sound like a group of budgies arguing. Mind you, Harpyll Trewthen sounds like that when he takes it upon himself to sing after a few too many meads.

So again thank you for including us in your detailed biography of Harry Potter, we may have only had a small part to play but we were there.

And as you know our true selves must always be protected because after all ... we walk among you.

Much love, mead and pasties to you.

Talker of trees, whisperer of spiders, and eater of cake.
First of the order of the Nightsrain.