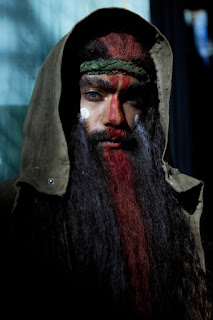 Romeo Kennedy encountered the Hairypeople as he watched the first series of Cleverman on BBC Three...

I have just finished watching series one of the Indigenous Australian SF 'Cleverman.' It was something I came across by accident and the premise intrigued me to the point that I wanted to see for myself what it was all about.

The series depicts a dystopian somewhat-present-day Australia. Six months have passed since Australians discovered that they were living in close-proximity to the Hairypeople who have kept their existence secret for hundreds of years.

The Hairypeople are subjected to verbal and physical abuse, internment, and denied human rights by the government. The media capitalize on the fear of the other and the Hairypeople are forced to live in large communities in the Zone, on the city outskirts.

Cleverman shines a light on the racism that is still very much prevalent today against the indigenous peoples. It is the story of how a community of people stand together against a tide of hatred and no longer allow things the way they are to perpetuate as "the norm"

And at the forefront of this move for change is the Cleverman.

The story takes an interesting turn in the first episode when we are introduced to the two brothers who could not be more different. Waruu is the older, seemingly more responsible brother who oversees the Zone and those who dwell within. Koen, on the other hand seems very apart from all of this and as we learn he and his brother are very much estranged. We see Koen hiding a family of hairy's only to instruct the CA (A militarized police force that incarcerate the Hairypeople and treat them abhorrently) as to their whereabouts for his own financial gain. However these moral roles that we see the brothers have, changes with the death of their uncle Jimmy. The Cleverman.

And when The Cleverman passes his gift is passed onto Koen much to Waruu's chagrin. As we soon learn The Cleverman is not just a title. It is a great honor and a great responsibility.

And Koen has to learn this pretty quickly.

The first series is only six episodes but it packs a lot in. At first you're not really sure what is going on as to who the big part players are. Jarrod Slater, played by Iain Glenn, is an example of this for the first few episodes the viewer can't quite grasp what side he is playing. Of course, I will not spoil it for you.

It is a brilliantly written SF that brings folklore and the contemporary together in a frightening environment. As well as the deeper political themes, at the heart of Cleverman lays the core of Aboriginal storytelling known as The Dreaming, of which the Cleverman himself is at the center.

From the first episode it reels you in with its intriguing premise and whilst the content regarding race is very upsetting, its overall depiction is of a world that is not unlike the world around us today. It is a twist on the superhero story and has a wonderful cast of characters. What's more is that it is a T.V show that does not whitewash, nor does it take away the struggle of a people trying to live their lives. Nor does it suffer from "white savior" these are Indigenous people writing, directing, and telling their own stories of their own culture and something we need to see more of in television as well as other mediums. These stories are out there and they deserve to be praised and celebrated because these stories matter and so do the people telling them.

I'm looking forward to series two of Cleverman and cannot wait to see how the journey progresses.

As a side-note, one of the many things I enjoyed of this series was the use of Kumbainggar, one of the many indigenous languages and spoken by the Gumbaynggirr Aboriginals of New South Wales. Also, the theme music by A. B. Originals (titled ‘Take Me Home’) is fantastic and one of the members of this rap duo plays Maliyan in the series.

I hope this series has a very long and healthy life because I loved it from the first episode.

Catch up with Cleverman on BBC Three via iPlayer